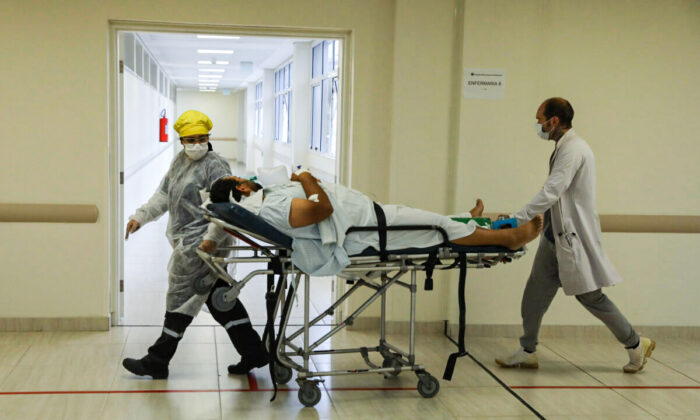 A patient is wheeled inside a hospital in Brazil in a file image. (Rodrigo Paiva/Getty Images)
PUBLIC HEALTH INFORMATION

An experimental treatment greatly reduced the risk of hospitalization and emergency room visits in people who contracted COVID-19, according to the maker of the drug and investigators running a clinical trial.

California-based Eiger BioPharmaceuticals and investigators running the TOGETHER trial say (pdf) that the treatment, Peginterferon Lambda, cut the risk of needing hospital care by 50 percent and death by 60 percent in a phase 3 trial measuring the results through the 28th day after receiving the treatment.

A single injection of the treatment was compared to placebo in a trial in Brazil featuring 1,936 patients who had mild or moderate COVID-19 and were designated as high-risk for progression to more serious forms of the illness.

Approximately 84 percent of the patients were vaccinated. The trial stretched into the period of time after the Omicron virus variant became dominant in many countries around the world.

Lambda appeared more successful when given within three days of symptom onset, according to the results.

“These data demonstrate that a single subcutaneous injection of Lambda has the potential to be a convenient, ‘one and done’ treatment to reduce the severity of COVID-19, reducing hospitalizations and death—even in a vaccinated population,” David Cory, Eiger’s president and CEO, said in a statement.

Eiger plans to submit a request for emergency use authorization to U.S. regulators in the near future.

“Lambda has demonstrated a reduction of risk in COVID-19-related hospitalizations or deaths in this clinical study in a predominantly vaccinated population, something that no other investigational drug has achieved—this is a game-changing event,” added Edward Mills, a professor at McMaster University in Canada who is leading the study.

The trial started in 2021 and is also examining the efficacy and safety of Fluvoxamine, an anti-depressant.