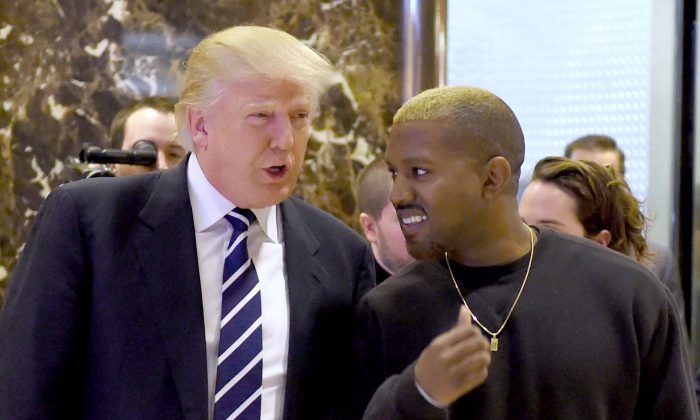 Singer Kanye West and President-elect Donald Trump arrive to speak with the press after their meetings at Trump Tower Dec. 13, 2016 in New York. (TIMOTHY A. CLARY/AFP/Getty Images)
Politics

President Donald Trump and the GOP have paid significant attention to attracting black and Latino voters, but so far these efforts have not led to new votes, according to exit poll data from elections last month.

Although pre-election numbers showed Trump with a rising approval rating among blacks, the “black wave” of black American voters shunning their traditional preference for the Democratic Party and moving into the Republican column, as predicted by some pundits and GOP strategists, failed to materialize.

Recording artist Kanye West’s activism on behalf of the president in the fall seemed to give Trump and Republicans a boost. The rapper wore a red “Make America Great Again” baseball cap as he laid out an informal anti-Democratic Party manifesto on “Saturday Night Live” on Sept. 29. “The blacks weren’t always Democrats,” West said.

Republicans were also buoyed by a Rasmussen Reports daily tracking poll in August that pegged the president’s approval rating among black Americans at 36 percent, which is almost double the 19 percent he had a year before. A poll released around the same time by the liberal National Association for the Advancement of Colored People showed that 21 percent of registered black voters approved of Trump’s job performance.

But those approval numbers didn’t carry over to the ballot box.

Black Americans, who made up 11 percent of the overall electorate, favored Democrats over Republicans by a margin of 90 percent to 9 percent, according to exit poll data published by CNN based on respondents who voted in 2018 House of Representatives contests.

Republicans had performed slightly better in 2016 House races. In that election, blacks were 12 percent of the electorate. Exit poll data from that year indicate blacks favored Democrats by a margin of 88 percent compared to 10 percent for Republicans.

In the 2016 presidential race, blacks favored Democrat Hillary Clinton over Trump by 89 percent to 8 percent.

Republicans lost ground on a nationwide basis with Latinos in 2018 compared to 2016.

In Texas, where incumbent Sen. Ted Cruz, a Republican, barely beat back a vigorous, well-funded challenge by Democrat Beto O’Rourke, Cruz won the votes of men by 56 to 43 percent. O’Rourke was backed by women, 54 to 46 percent.

In the hard-fought contest for the U.S. Senate in Florida, the successful candidate, Republican Rick Scott, prevailed over incumbent Democrat Bill Nelson by 58 to 42 percent among men. Nelson won women 56 to 43 percent.

That electorate was 66 percent white and 34 percent non-white. Whites went for Scott over Nelson by 60 to 40 percent. Non-whites favored Nelson by 70 to 29 percent. Latinos were 15 percent of that electorate, compared to blacks at 13 percent, and “other” at 4 percent.

Latinos favored Nelson 54 to 45 percent. Blacks backed Nelson 90 to 10 percent. Respondents in the “other” category went for Nelson by 66 to 32 percent.

In another hard-fought race, this time for Florida governor, men broke for the victor, Republican Ron DeSantis over Democrat Andrew Gillum by 58 to 41 percent. Women favored Gillum over DeSantis by 55 to 43 percent.

Whites went for DeSantis over Gillum by 60 to 39 percent. Non-whites favored Gillum by 68 to 30 percent. Latinos went for Gill 54 to 44 percent. “Other” voters preferred Gillum 65 to 33 percent.

In the bitterly contested race for Georgia governor, Republicans came close to eliminating the gender gap. Men broke for the successful candidate, Republican Brian Kemp, over Democrat Stacey Abrams by 52 to 46 percent. Women favored Abrams over Kemp by 51 to 49 percent.