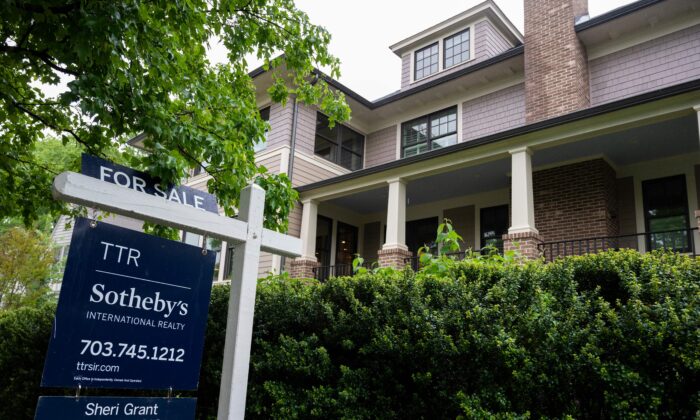 A for sale sign is seen next to a house in Arlington, Virginia on May 6, 2020. (Andrew Caballero-Reynolds/AFP via Getty Images)
US Real Estate

Sales of previously-owned homes in the United States fell in March as mortgage rates climbed to a 12-year high, leading mortgage refinance demand to plunge by an annual 68 percent while house prices hit a new record.

Total existing-home sales fell 2.7 percent over the month and 4.5 percent over the year in March, marking the second consecutive month of declines, according to the National Association of Realtors.

“The housing market is starting to feel the impact of sharply rising mortgage rates and higher inflation taking a hit on purchasing power,” Lawrence Yun, NAR’s chief economist, said in a statement. “Still, homes are selling rapidly, and home price gains remain in the double-digits.”

The median price for a previously occupied home climbed to $375,300, up 15 percent from a year ago and a new record high.

“Home prices have consistently moved upward as supply remains tight,” Yun said. “However, sellers should not expect the easy-profit gains and should look for multiple offers to fade as demand continues to subside.”

Mortgage rates have climbed to a 12-year high, with a chilling effect on home sales, as well as on mortgage originations and refinance activity.

The Mortgage Bankers Association (MBA) reports that the 30-year fixed rate has risen 70 basis points in just the past month to hit 5.2 percent, the highest level since 2010.

“Ongoing concerns about rapid inflation and tighter US monetary policy continued to push Treasury yields higher, driving mortgage rates to their highest level in over a decade,” Joel Kan, MBA’s Associate Vice President of Economic and Industry Forecasting, in a statement.

The Fed in March raised its benchmark interest rate by 25 basis points, with markets expecting a sharper 50-basis-point hike next month as the central bank scrambles to contain surging inflation, which is running at a 41-year high.

Treasury yields, which tend to track mortgage rates, have been on a tear recently, with the 10-year touching 2.94 percent on Tuesday, the highest level since 2018.

The run-up in rates has driven mortgage refinance demand to drop 68 percent compared to a year ago and down 8 percent from the previous week, according to the MBA.

“The recent surge in mortgage rates has shut most borrowers out of rate/term refinances, causing the refinance index to fall for the sixth consecutive week,” Kan said. “In a housing market facing affordability challenges and low inventory, higher rates are causing a pullback or delay in home purchase demand.”

“However, high input costs and shortages, of both labor and materials, remain headwinds for builders. Rising mortgage rates that crimp demand will also be a consideration for building activity going forward,” she added.

In March, there was a 2-month supply of housing inventory at the current sales pace, according to NAR, up from 1.7 months in February. Experts say that a balanced market is when there’s around 6.5 months of supply.

With expectations that mortgage rates will climb further, NAR’s Yun predicts a 10 percent decline in home purchase transactions this year, along with some readjustment in house prices.

March was the 121 consecutive month of year-over-year home price increases, the longest-running streak on record, according to NAR.