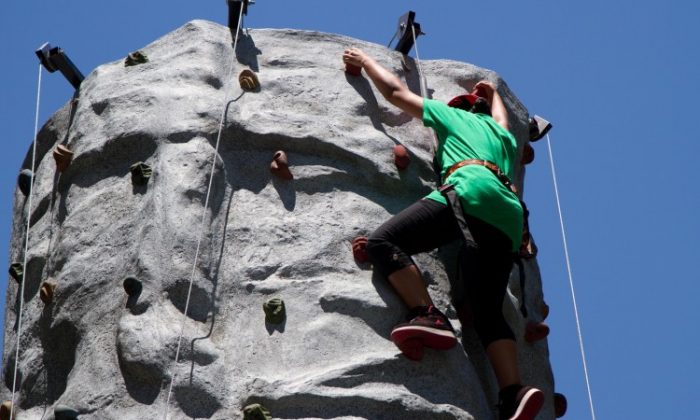 NEW YORK—Today many people are choosing remote controls over basketball courts, iPads over parks, and burgers over bikes. The more sedentary lifestyle, paired with an increase in the consumption of cheap, high calorie foods is contributing to the obesity epidemic, one of the leading preventable diseases in the United States.

“This year, for the first time in the history of world, more people will die from the effects of eating too much food than from starvation,” Mayor Michael Bloomberg said Tuesday.

To help curb this problem in the city, Mayor Bloomberg formed the Obesity Task Force at the beginning of this year. The task force promotes healthy eating habits and increasing physical activity, by offering free classes and showing citizens ways to use the city as their gym.

Not all of the initiatives have been a hit.

Bloomberg’s proposal to limit the size of sugary drinks in the city to 16 ounces received national attention, with opponents saying a ban would be government overreaching its responsibilities.

The New York City Board of Health will vote on Bloomberg’s proposal on Sept. 13.

Children have not been spared from this national epidemic, with about one in three children overweight or obese, according to the American Heart Association.

“We are raising the most sedentary generation in history,” Sam Kass, White House assistant chef and senior policy adviser for healthy food initiatives, said during a panel meeting kicking off National Childhood Obesity Awareness Month on Sept. 1. “The average American child is spending seven and a half hours in front of a screen every day.”

Partnership for a Healthy America is working to reintegrate physical activity into the everyday lives of children and their families. The partnership aims to design programs for all kids, regardless of ability or economic status, with fun in mind and a focus on keeping the desire to stay active throughout their lives.

“We will be working to give kids the desire to do what they are built to do, which is to move and have fun and be kids,” Larry Soler, president and chief executive officer of Partnership for a Healthy America, said.

“What we have done in the school is improve education and put in a lot more salad bars, and we have worked with the chefs to cook with less fat and less fattening things,” Bloomberg said Tuesday.

There are plenty of national and local initiatives in place to help fight obesity, and plenty of fitness centers and classes to take. But creativity, especially for nonathletes can work just as well.

“I don’t want people to feel like they are at a disadvantage if they don’t have that built into their genes. Actress Christine Taylor said on Saturday. “My kids were born into a funny family and none of this stuff really came natural to them or my husband and I.”

Soler, from Partnership for a Healthy America, said physical activity “is one of the few things we do that helps us stay healthy and feel better, happier, improve our overall outlook, and performance. And it is free.”