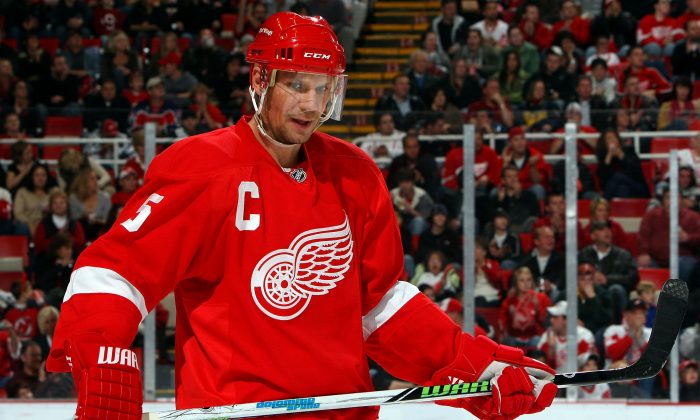 It was a no-brainer inducting Nicklas Lidstrom into the Hockey Hall of Fame in his first year of eligibility amid a class of NHL blueliner talent. That honour became official at the annual HHOF ceremony in downtown Toronto on Monday.

In his entrance speech, Lidstrom quoted a Swedish saying: “Things never turn out the way you imagined.” In his case, he never imagined joining the HHOF and being part of the special ceremony Monday night. He has an air of humility and calmness in speaking and in playing the game.

Dubbed in all seriousness “The Perfect Human” by his former Detroit Red Wings teammates, Lidstrom goes down in history as one of the greatest defensemen of all time. He built his reputation in today’s “modern” NHL of parity. The most highly decorated of the HHOF’s Class of 2015, Lidstrom’s most noteworthy hockey achievement is his seven Norris trophies. Only Bobby Orr’s eight surpasses him.

The seven came from 2001 to 2011; the Swede’s age went from 31 to 41 over that period. No other NHLer racked up that many trophies over the 20-year span of his glorious career. Nobody has been at the absolute top of a given position for so long in today’s NHL.

My success is really our success.
— Nicklas Lidstrom

Lidstrom’s No. 5 jersey was retired in 2014 by the Red Wings, the team for which he played 1,564 games—most all-time for any player on a single team. It’s truly a rare accomplishment in today’s salary cap NHL to see a player become associated with one team and play there his entire career at a top level.

Watching Lidstrom play was like watching a chess grandmaster. It was as if he could see how a play would develop a few moves ahead. He wasn’t the biggest or strongest, or fastest player on the ice, but he was extremely skillful with excellent “hockey-sense.” As a result, he only missed 44 games over those 20 seasons.

Lidstrom’s hockey sense allowed him to make the game look effortless, like Roger Federer on the tennis court. That comes from a thorough understanding of the game and positional awareness. The ability to do that shows how good Lidstrom was at his craft.

Lidstrom also won four Stanley Cups with Detroit and he became the first European to captain a Stanley Cup-winning team.

Lidstrom faced the likes of Wayne Gretzky and Mario Lemieux as well as Alex Ovechkin and Sidney Crosby.

He credited his former captain Steve Yzerman, who presented him with his inductee plaque, for teaching him how to be a captain, something he became at the age of 36 in 2006. The consummate team player, Lidstrom said, “I certainly didn’t get here by myself. It takes a team.

“My success is really our success.”

He was a big part of a Detroit team that was the last to win two Stanley Cups in a row in 1997 and 1998. He never missed the playoffs in his 20-year career.

In international competition, Lidstrom also reached the pinnacle, winning an Olympic gold medal with Sweden in 2006 and a World Championship gold medal in 1991. That made him part of the exclusive “Triple Gold Club.”

Lidstrom was inducted in a HHOF class featuring outstanding rearguards. Along with him was offensive defensemen Phil Housley and the physical force that is Chris Pronger.

Lidstrom is a model not just for young Swedish hockey players, but for all players. Success can be achieved by playing the game intelligently. His impact can be seen in a player like Ottawa’s Erik Karlsson, a two-time Norris Trophy winner.

It will be a long time before the NHL sees another Nicklas Lidstrom.