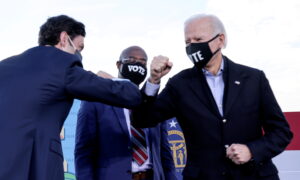 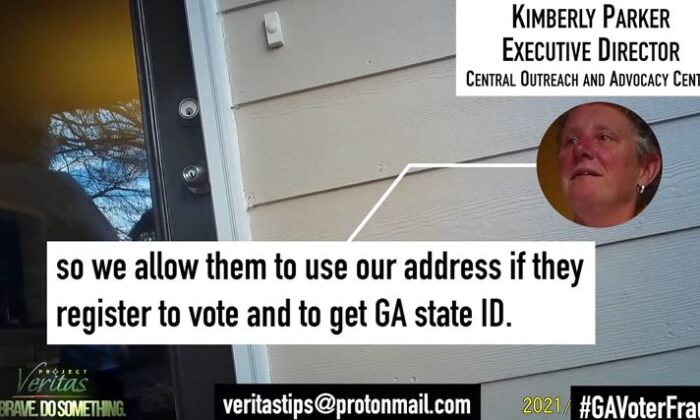 In this image from video, Kimberly Parker, executive director for the Central Outreach and Advocacy Center in Atlanta, Ga., speaks to Project Veritas. The undated video was released on Jan. 4, 2021. (Courtesy of Project Veritas)
Georgia

The executive of a homeless outreach center in Georgia said in a newly released video that the center allowed “countless” people without homes to use the center’s address for voter registration.

“The majority of people we serve don’t have an address, so we allow them to use our address if they register to vote and to get Georgia state ID,” Kimberly Parker, executive director of the Central Outreach and Advocacy Center, said in the video.

State law requires voters to be a resident of the county in which they’re voting. It forbids people from using a false statement to register to vote. Wrongdoers can land up to 10 years in prison.

However, according to a voting guide, homeless people can use a shelter or church to register to vote.

The center is located in Atlanta.

A spokesperson for Fulton County told The Epoch Times via email that officials “will request clarification from the County Attorney’s office regarding provisions in Georgia law for voter registration addresses for homeless residents.”

An official with Georgia Secretary of State Brad Raffensperger’s office said homeless people have a right to vote.

The video was released by Project Veritas, a nonprofit journalism watchdog.

“So, I can’t even begin to tell you how many people have that address on their ID. We’ve never run into any problem with that until this election,” Parker says in the footage. “One of our board members got wind that they thought we’re doing things not on the up and up because so many have the address, but we’ve not heard any repercussion from it since.”

The center’s social media pages were offline on Tuesday. It has tabs for staff and a board of directors on its website, but the links are not active. Its phone lines are not open, and it doesn’t have an email contact listed.

In another video, Adam Seeley, board member of Central Night Shelter, which has the same address, and director of social services at Emmaus House, said “a couple thousand people” used the Emmaus House address to register to vote. Emmaus House didn’t respond to a request for comment.