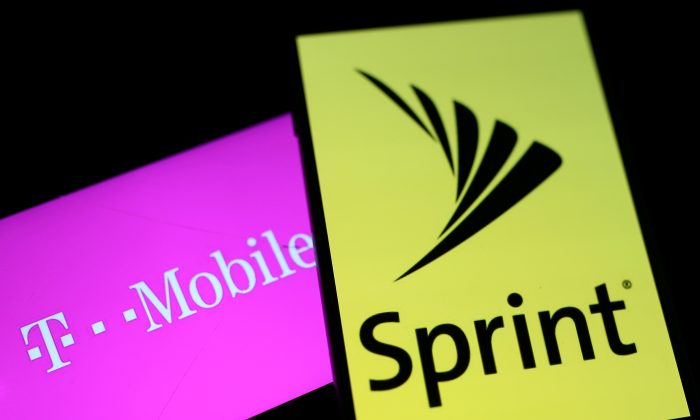 Smartphones with the logos of T-Mobile and Sprint are seen in this illustration taken on Sept. 19, 2017. (REUTERS/Dado Ruvic/Illustration)
Business & Markets

T-Mobile is close to agreeing tentative terms on a deal to merge with Sprint, people familiar with the matter said on Friday, a major breakthrough in efforts to merge the third and fourth largest U.S. wireless carriers.

The transaction would significantly consolidate the U.S. telecommunications market and represent the first transformative U.S. merger with significant antitrust risk to be agreed since the inauguration of U.S. President Donald Trump in January, testing his administration’s appetite for such deals.

The development follows more than four months of on-and-off talks this year between the companies, and comes as the telecommunications sector seeks ways to tackle investments in 5G technology that will greatly enhance wireless data transfer speeds.

Japan’s SoftBank Group, which controls Sprint, will own 40 to 50 percent of the combined company, while T-Mobile majority owner Deutsche Telekom will own a majority stake, two of the sources said.

Once terms are finalized, due diligence by the two companies will follow and a deal is expected by the end of October, though talks may still fall through, the sources said.

A merger would create a business with more than 130 million subscribers, just behind Verizon and AT&T. Revenues would top $70 billion and analysts say there would be massive scope to cut costs.

The sources asked not to be identified because the negotiations are confidential. Sprint and Deutsche Telekom declined to comment. T-Mobile and SoftBank did not immediately respond to requests for comment.

SoftBank founder Masayoshi Son abandoned an earlier attempt to acquire T-Mobile for Sprint in 2014 amid opposition from anti-trust regulators concerned that consumers could lose out.

That deal would have put SoftBank in control of the merged company, with Deutsche Telekom becoming a minority shareholder.

Since then, T-Mobile has outperformed Sprint under Chief Executive John Legere, who the sources said would lead the combined company.

Earlier this month, Federal Communications Commission Chairman Ajit Pai gave a potential boost to the tie-up when he recommended in a new annual report that for the first time since 2009 the FCC has found there is “effective competition in the marketplace for mobile wireless services.”

The FCC is due on Tuesday to vote the annual report on the state of the wireless competition market and Pai may face pushback from Democrats on the commission.

Son made headlines in early December when he appeared in the marble lobby of Trump Tower in New York alongside the then president-elect, dressed in a red vest and red tie nearly identical to that of the tycoon turned commander in chief.

He was among the first in a series of Asian billionaires and leaders to pay tribute to Trump, who won office in November on a platform that focused on national security and protecting U.S. jobs.

Son’s pledge to Trump to invest $50 billion in the United States and create 50,000 jobs was light on details but spoke to the president’s election promise to boost economic growth by making deals with individual companies, rather than through complicated trade deals.

Last month, Sprint CEO Marcelo Claure said an announcement on merger talks should come in the “near future.”

AT&T is in the process of getting its own transformative deal, its $85.4 billion acquisition of media conglomerate Time Warner approved by U.S. regulators.

By Greg Roumeliotis and Arno Schuetze