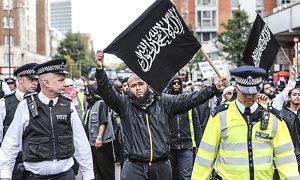 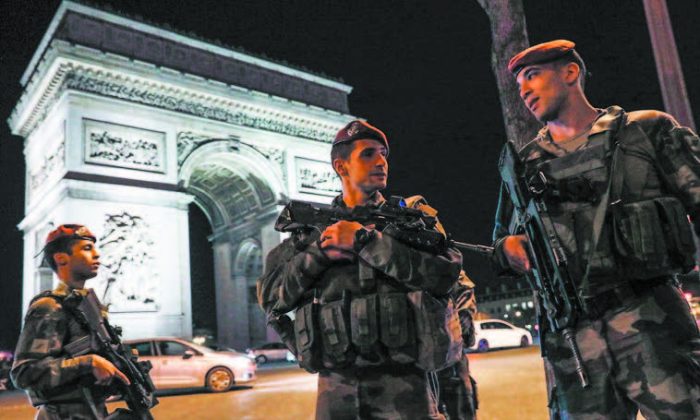 French soldiers stand guard at the Arc de Triomphe near the Champs Elysées in Paris after a shooting on April 20. (THOMAS SAMSON/AFP/GETTY IMAGES)
Europe

EXCLUSIVE: ISIS Plans to Poison Food in Stores in Europe

The internal notice directs Islamic terrorists on the creation of poisons, which it advises them to use on food products in stores. The attack notice was published on a private forum of the terrorist network on Sept. 3 and had been viewed 198 times by midday Sept. 4.

Data extracted from the notice by BOC details the plan and shows it was viewed by potential terrorists in Brussels, Paris, Stockholm, Berlin, Nice, and in the state of Florida.

A description on the planned attack from BOC advises government agencies to escalate their terror threat levels and to “advise vendors of consumer perishables that are open and readily accessible to diligently monitor customers lingering during nonpeak shopping hours.”

The terrorist group allegedly calls itself the Knights of Lone Jihad, and its post contains a graphic of a blood-covered hand with the words “First Method Poison” written next to it.

A hashtag on the image suggests the ISIS members have ties to Wilayat al-Furat, or Euphrates Province, which was the administrative division the terrorist organization established on the border of Iraq and Syria.

ISIS began its rise in this self-declared province and nearby areas. A key ISIS propaganda channel, which the latest notice appears to be tied to, uses the name of the province.

The notice tells terrorists, “You have the following method—poisoning the kuffar,” and tells them to inject poison into foods in markets. The Arabic word “kuffar” is a derogatory term for non-Muslims.

The communication updates the objectives of the terrorist group to call for attacks “in Europe and the disbelieving West and everywhere else,” using any means. It then celebrates many of the terrorist attacks that have been carried out in Europe and elsewhere, saying they have caused a “state of alert, terror, fear, and loss of security.”

ISIS became a terror threat in part because disorder in Iraq gave it an opportunity to grow and to seize territory.

President Donald Trump has updated the U.S. strategy in Afghanistan to ensure the United States does not repeat what took place during the Obama administration’s withdrawal from Iraq, which allowed ISIS to seize control.

“The vacuum we created by leaving too soon gave safe haven for ISIS to spread, to grow, recruit, and launch attacks,” Trump said on Aug. 21. “We cannot repeat in Afghanistan the mistake our leaders made in Iraq.”

When terrorists launched the attacks on Sept. 11, 2001 that destroyed the World Trade Center and killed 2,996 people, Afghanistan was a hotbed for terrorists and a base for al-Qaeda.

Trump noted that, at the time of the 2001 attacks, Afghanistan was “ruled by a government that gave comfort and shelter to terrorists,” and said that currently in the state, “a hasty withdrawal would create a vacuum that terrorists, including ISIS and al-Qaeda, would instantly fill, just as happened before Sept. 11.”

With the new strategy, the U.S. military will no longer be focused on trying to export its governmental system to Afghanistan. Trump said, “We are a partner and a friend, but we will not dictate to the Afghan people how to live, or how to govern their own complex society. We are not nation-building again. We are killing terrorists.”