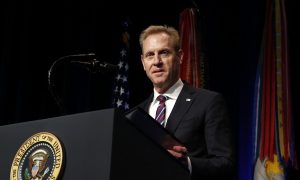 There is a distinct strategy behind President Donald Trump’s decision to reopen the government, according to Jason Meister, Trump 2020 Campaign advisory board member.

In my interview with Meister, he provides an insight into both the Republican and Democrat deeper-level politics at play in the current border-wall debate. He also reveals the important advantages Trump may well have gained in his move to reopen the government, and gives his view on how the man he describes as a pragmatist and problem-solver stands in his prospects of both ‘building the wall’ and being re-elected.

Jan Jekielek: Let’s get a few things out of the way. It’s been said that Trump somehow, by reopening the government, has lost the battle on this issue. Would you say that’s accurate?

Jason Meister: I don’t think that there could be anything further from the truth. Trump is a negotiator. He understands how to make deals and this is a very strategic position that he’s taken. He has effectively taken the leverage away from the Democrats. They were using furloughed federal employees as leverage, and by reopening the government and paying those employees for the next three weeks, he’s effectively taken away the Democrats leverage. Now, it’s on the Democrats to come to the table in a meaningful way and finally do something that both politicians on both sides of the aisle have yet to do, secure our border and protect Americans; put Americans first. It’s a humanitarian crisis and it’s a national-security crisis. And the president is not going to let it happen. He’s going to protect our border and I think the Democrats are going to have to come to the table.

Mr. Jekielek: So you mentioned a national-security crisis, that there is a crisis. Some people have called this a manufactured crisis. What would you say to that?

Mr. Meister: It’s not a manufactured crisis. Even Democrats have admitted it over the decades—Nancy Pelosi, Chuck Schumer, Barack Obama, Hillary Clinton, they’ve all articulated at one point or another that they were for a physical barrier at the border. There is no manufactured crisis. Go speak to the mothers and fathers of people who’ve lost their children to illegal immigrants who murdered them. Talk to the people who have family members that have drug problems because of opioids, and fentanyl, and all sorts of other drugs that have come over the border, to parents of people who have been affected by MS-13—the gangs that have been coming over the border. So it’s not a manufactured issue. It’s an issue that’s been going on for decades and it has to be dealt with.

Mr. Jekielek: It’s also been said that the president is somehow isolationist, that he’s actually against immigration. How does that work?

Mr. Jekielek: So, maybe you can reiterate the president’s position on DACA. How does that work?

Mr. Meister: With regards to DACA, it’s obvious that Trump has made some gestures that he’s willing to negotiate with the Democrats so we can finally secure our border. It’s something that we have to do. So he’s been willing to negotiate with them on DACA in exchange for a border wall. And if you look at places along the border where a physical barrier has been built, it has reduced illegal immigration by nearly 90 percent.

Mr. Jekielek: Are there any benefits to illegal immigration?

Mr. Meister: There are no benefits. It’s actually been a huge burden on the middle class in this country. And I think that from a globalist perspective, I understand why they would want illegal immigration, cheap labor, etc. But the middle-class citizens, the hard-working U.S. citizens that basically elected Trump, those people are the ones that are most negatively affected by illegal immigration. And the president is saying, ‘Look, you are not a country if you don’t secure your borders.’ It’s that simple. This isn’t brain surgery. This is common sense. And Trump is not going to allow this country to have unsecured borders anymore.

Mr. Jekielek: What do you make of [House Speaker] Pelosi’s and [Senate Minority Leader] Schumer’s seeming absolute opposition to any border structure and their position in the past as you mentioned earlier, especially Schumer’s about having some sort of structure.

Mr. Meister: It’s very obvious from the beginning of this whole negotiation and the government shutdown that the Democrats have decided that they will not allow Trump to have a wall. Why? Because they know that it’s one of the most important issues that he campaigned on in 2016. They know that if they give away the ability for border security and a wall, it’s going to be a sure bet that Trump is re-elected in 2020. So it’s all politics with them. It’s all political games and maneuvering. And for Trump, it’s about the people of the United States—it’s about securing the border. It’s about doing something that for decades hasn’t been done by Democrats or Republicans. Look, Trump is a pragmatist. He’s a problem-solver. That’s who we elected. He’s a businessman from New York City, a real estate developer who understands how to build things and build things on time and under budget, and he’s going to build the wall.

Mr. Jekielek: It’s also been said that there are some technology solutions that don’t require a physical structure to reduce illegal immigration, and cross-border crime, and so forth. What about that?

Mr. Meister: I think we have to do all of the above. I don’t think it’s one thing or another thing. For sure, we need a physical barrier. Walls work. Look at Israel. Look at the places on the southern border where there is a physical barrier. As I said earlier, walls have cut illegal immigration by nearly 90 percent. So it’s all of the above. We should be looking at every technology. We need to have secure borders to have legal immigration.

Mr. Jekielek: You mentioned there could be a kind of a benefit from the perspective of a globalist. Can you unpack that for us a little bit?

Mr. Meister: The way I look at immigration, or any issue for that matter, is how do we make the United States safer. How do we make the United States better? And, unfortunately, on the immigration issue, the Left and the liberals actually ask a different question. They don’t ask what makes us safer or what makes us better. They ask what’s better for the immigrant or what’s better for the immigrant’s home country. And that is where the problem lies.

Mr. Jekielek: Can you outline for me what you see as the costs of having an open or a very porous border?

Mr. Meister: For decades, our borders were effectively Swiss cheese holes through the border and it took jobs away from middle-class Americans; it brought drugs over the border, and gangs. You see that crime was up significantly. So I think that those are the issues that we have to think about when we’re protecting our border.

Mr. Jekielek: You wrote a recent op-ed in Town Hall, where you talked about how the furloughed U.S. government workers are being used as a kind of a bargaining chip or as a tool, some sort of political tool. Can you expand on that?

Mr. Meister: When this government shutdown began, the Democrats immediately ran to their corner and said that Trump shut the government down and is effectively preventing families from getting paid, and it’s going to prevent them from paying their mortgages and feeding their children. They basically took the furloughed employees and used it as leverage and pressure against the administration, in an effort to prevent him from getting border security. And by reopening the government last week and paying those employees, Trump has strategically taken away the Democrats’ leverage for the next three weeks. It’s now on them. The ball is in their court. They need to come to the table in a meaningful way. And we’re going to see if they’re really honest about wanting to protect the border.

Mr. Jekielek: So let’s say we hit February 15th and there’s no deal. What happens?

Mr. Meister: If the Democrats actually don’t produce any type of bargaining regarding the border security and a physical barrier, the president has said many times that he will do whatever he has to do. And one of the things he can do is declare a national emergency and siphon off funds to build the physical barrier that we so desperately need. Trump isn’t going to allow Democrats to obstruct something this important to the American people as securing the border, securing our country.

Mr. Meister: The ideal outcome is that the Democrats decide they don’t want to play the political games that they’ve been playing and come to the realization that, just as they did in the past many times, Hillary Clinton, Pelosi, Schumer —you’ve seen the videos, they’re all out there because that stuff doesn’t leave the internet—they’ve said time and time again that we need a physical barrier. So if they put the political gamesmanship aside and come to the table in a meaningful way and they put U.S. citizens first and border security over politics, that would be the best outcome and we get a little bit of what they’re asking for and we put up a wall. We have a safe border and we have legal immigration, not illegal immigration.

Mr. Jekielek: You seem pretty passionate about this issue. Why?

Mr. Meister: I have children and I’m a father and just like the president is trying to put America first, I put my family first. This is an important issue not just today, but it’s for decades into the future. I want my children to grow up in a safe country, in a country where there’s the rule of law, how about that? I mean we have to have laws, we’re a country of laws, we’re a country of borders, we’re a country of laws. There’s no reason to break laws, to have illegal immigration, we can have legal immigration just as we’ve had for decades, and we need to protect our laws, we need to protect our children for the future.