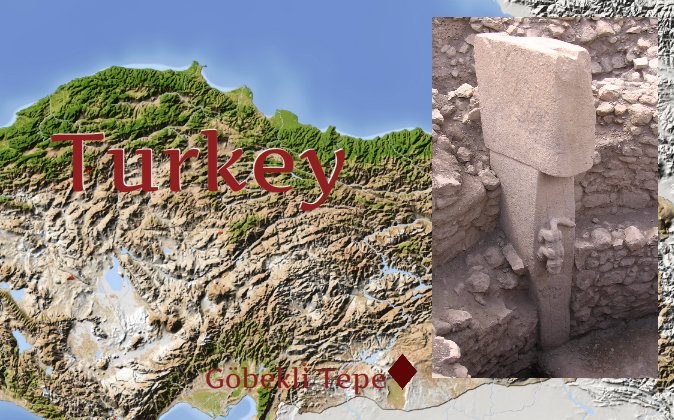 Göbekli Tepe is a very ancient archaeological site located at the top of a mountain ridge in south-eastern Anatolia region of Turkey. Dating back at least 12,000 years, it is home to the oldest known temple in the world and has been intensively studied by archaeologists since its discovery nearly two decades ago.  According to a news release in Hurriyet Daily News, archaeologists have now announced that they believe it to be the oldest known sculptural workshop on the planet.

Göbekli Tepe is comprised of numerous temples made with pillars weighing between 40 and 60 tonnes and T-shaped stelas with intricate depictions of bulls, snakes, foxes, lions and other animals carved into the stone.  Yet the awe-inspiring site was supposedly built by ‘primitive’ Neolithic men who lacked sophisticated tools, causing speculation as to how it was built and why.

Excavations at the site are being carried out by the German Archaeology Institute and the Turkish Culture and Tourism Ministry. Associate Professor Cihat Kürkçüoğlu from the nearby Harran University’s (HRU) Arts and History Department, said that they had found small ‘Venus figurines’ dating back up to 20,000 years. This is not actually unique as Venus figurines have been found throughout Europe dating back up to 30,000 years.  It is the age of the monumental sculptures that the archaeologists are particularly interested in. Nowhere else in the world are there known to be massive stone reliefs as old as in Göbekli Tepe.

“Göbekli Tepe is the birthplace of plastic arts,” said Mr. Kürkçüoğlu. “It is a temple but at the same time it’s the world’s oldest sculpture workshop. You expect primitive examples of stone sculptures but you find very improved, aesthetic and artistic sculptures. This surprised us greatly. Some compositions in Göbekli Tepe are even good enough to make today’s graphics jealous. As the archaeological excavations progress, I believe we will find older prototypes,” he said.

Göbekli Tepe has shown the world that Neolithic man was far more sophisticated than previously imagined. While the site is currently the oldest temple and sculptural workshop currently known to man, it is likely that there is much still beneath the surface that is yet to be revealed.

*Featured image of Turkey via Shutterstock.