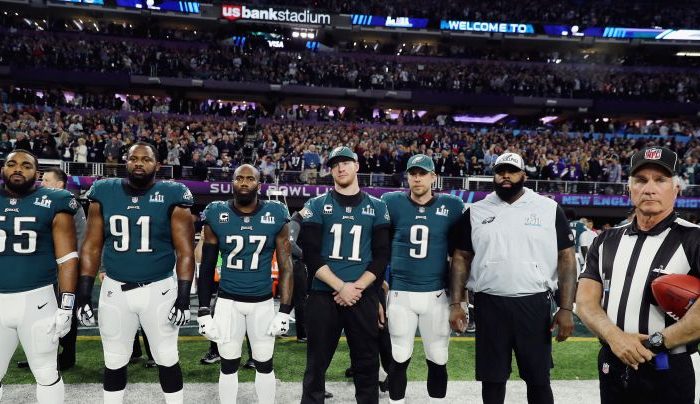 Both President Donald Trump and Vice President Mike Pence have spoken out against players taking a knee or engaging in other protests during the anthem. Last season, the anthem protest was started by former San Francisco 49ers quarterback Colin Kaepernick, who said he was protesting against alleged police brutality and racism.

In one instance this season, Vice President Pence – the former governor of Indiana – and his wife walked out of an Indianapolis Colts-49ers game when players on the 49ers protested during the anthem.

Trump in September said that players who protest should be fired.

On social media, a number of NFL fans said they would boycott watching NFL games – including the Super Bowl.

President’s message to brave men and women of our Armed Forces unable to be home with family and friends to enjoy the Super Bowl: “We hold them in our hearts and thank them for our freedom as we proudly stand for the National Anthem.” #USA pic.twitter.com/GpyqsLBvmP

Before Super Bowl 52, Trump issued a statement on Sunday.

He said, “As many Americans come together to watch the Super Bowl, Melania and I extend our greetings and appreciation for those who make occasions like this possible, particularly the brave men and women of our Armed Forces.”

Trump added, “Though many of our Nation’s service members are unable to be home with family and friends to enjoy this evening’s American tradition, they are always in our thoughts and prayers. We owe these heroes the greatest respect for defending our liberty and our American way of life. Their sacrifice is stitched into each star and every stripe of our Star-Spangled Banner. We hold them in our hearts and thank them for our freedom as we proudly stand for the National Anthem.”

The president said, “We send our best wishes for an enjoyable Super Bowl Sunday. May God bless and protect our troops, and may He continue to bless the United States of America.”

Raise Your Glass (or chicken wing) because Pink is performing the National Anthem at the #SuperBowl. pic.twitter.com/vOJr3dFsV0