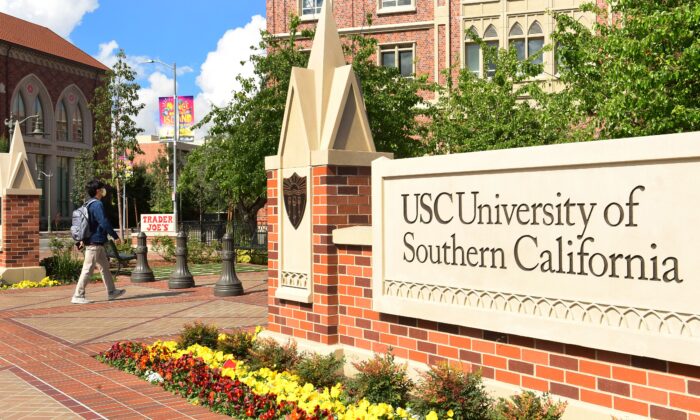 A former dean of the University of Southern California’s (USC) School of Social Work pleaded guilty Sept. 19 to a federal bribery charge in a political corruption case, admitting she funneled $100,000 through the university on behalf of then-County Supervisor Mark Ridley-Thomas in hopes of earning his support for a lucrative county contract that would benefit her school.

Marilyn Louise Flynn, 83, of Los Feliz, is scheduled to be sentenced March 20, 2023. The bribery charge potentially carries a term of up to 10 years in federal prison.

Prosecutors have agreed to recommend Flynn satisfy her custodial term by way of home confinement. They also agree to a fine of no more than $150,000 against her, according to a plea agreement released by the U.S. Department of Justice.

Susan Shelley, a commentator on California politics and policy, columnist for the Southern California News Group, and host of the Howard Jarvis Podcast for KABC, told The Epoch Times Flynn’s decision to plead guilty is a hard hit on Ridley-Thomas.

“If he is acquitted then he would be back on the city council,” she said. “But it’s looking like he won’t be acquitted because [Flynn’s guilty plea] is very bad news for him.”

According to her plea agreement, Flynn was trying to get an amendment to a contract between the School of Social Work and the Los Angeles County Department of Mental Health in 2018 involving services provided by USC Telehealth—a clinic with USC students providing online mental health and counseling services to clients referred by the county.

The social work school was facing a multimillion-dollar budget deficit at the time, prosecutors said.

According to prosecutors, in April 2018, Ridley-Thomas allegedly arranged for Flynn to funnel $100,000 from his campaign account through the School of Social Work to a nonprofit operated by his son, Sebastian Ridley-Thomas, who had recently resigned from the state Assembly amid a sexual harassment probe.

Prosecutors contend Ridley-Thomas wanted to provide the money to support his son’s nonprofit but didn’t want the funds linked to him or his campaign.

The pair allegedly concealed the arrangement from the university, knowing it would have violated university policy, according to the plea agreement.

In May 2018, after the money transfer was completed, Ridley-Thomas allegedly set up a meeting between Flynn and a high-level county official to discuss moving forward with the amendment Flynn was seeking on the Telehealth contract. He subsequently voted in favor of the amended contract, which was expected to generate about $9 million a year for her school, prosecutors said.

The indictment of Ridley-Thomas also alleged that he conspired with Flynn to obtain graduate school admission, a full-tuition scholarship, and a paid professorship for his son.

His son later became a professor of social work and public policy at the university—despite lacking a graduate degree—and was eventually terminated over questions about his original appointment and concerns by the university over the $100,000 donation.

The other influential politician who received a full scholarship from USC’s social work program was Rep. Karen Bass—as reported by the Los Angeles Times in early September.

Bass is the leading contender in the race for mayor of Los Angeles against real estate developer Rick Caruso.

Shelley said even though Bass probably won’t be legally affected by the case before the Nov. 8 election, “it doesn’t look good” for her at this point as a scholarship recipient in 2011 from Flynn.

“If there’s going to be any kind of legal entanglement for Karen Bass, it would not be before the election,” she said. “However, it’s a vulnerability anytime you are connected in any way to a bribery case, especially when [someone] pleaded guilty.”

Flynn was dean of the school for 21 years until her departure in 2018. She had originally been facing the same slate of federal charges as Ridley-Thomas.

Responding to news of her plea agreement, USC issued a statement last week saying the university is “not a party to the criminal case but respects the judicial process.”

“USC strongly supports the School of Social Work and the role it plays in training those who serve the public good. After the university learned during the summer of 2018 about unethical conduct by the former dean, we quickly disclosed the matter to the U.S. Attorney’s Office,” the statement read.

Mark Ridley-Thomas is a giant figure in local politics, previously serving on the Los Angeles City Council from 1991–2002, then serving in the state Assembly and Senate before he was elected to the county Board of Supervisors in 2008, serving until 2020 when he returned to the city council.

He has a doctorate in social ethics from USC and spent 10 years as executive director of the Southern Christian Leadership Conference of Greater Los Angeles, beginning in 1981.