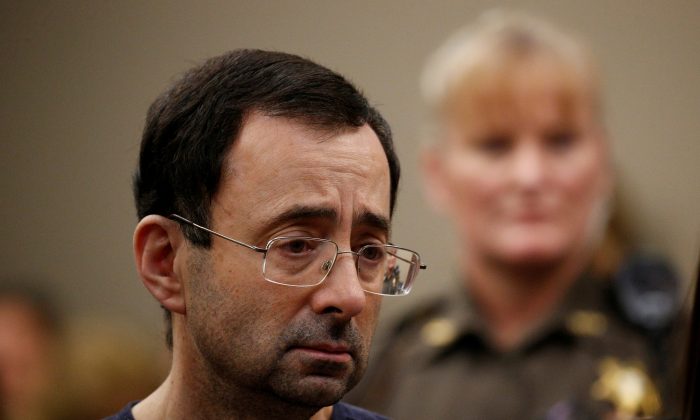 Former USA Gymnastics doctor Larry Nassar is scheduled to appear in a Michigan courtroom on Wednesday Jan. 31 for a second sentencing hearing, after already being sentenced to 40 to 175 years in prison for abusing young female gymnasts who were entrusted to his care.

Dozens of victims are expected to appear in court, as they did in the previous hearing, to tell a judge how Nassar abused them as young athletes under the guise of medical treatment. The hearing is expected to last several days.

More than 150 victims offered searing accounts of his sexual assaults in another courtroom in Lansing, Michigan.

As part of his agreement with state prosecutors, Nassar, 54, pleaded guilty last fall to two sets of charges in different counties and must be sentenced separately for each set.

The latest proceeding in Eaton County, Michigan, will unfold as fallout from the scandal continues.

Around 140 victims have filed a lawsuit against Nassar, USA Gymnastics and Michigan State University (MSU), claiming the institutions knew about allegations of abuse years ago and failed to act.

USAG said last week after Olympic officials threatened to decertify the organization as the sport’s U.S. governing body that its entire board had resigned, and sponsors have already backed away ahead of the 2020 Olympic Games.

The USOC, which has been criticized by victims as well, has announced an independent investigation into both its own conduct and that of USAG.

The Michigan attorney general’s office, which prosecuted Nassar, is pursuing a criminal probe into the school over its handling of allegations against Nassar. The university’s president and athletic director stepped down in the wake of Nassar’s sentencing.

At least one congressional committee plans to hold hearings on the scandal. The U.S. House of Representatives passed legislation on Monday and the Senate on Tuesday to require USOC officials to immediately report any allegations of abuse to law enforcement.

Nassar faces a minimum of 25 years in prison in Eaton County, though he is already assured of spending the rest of his life in prison. He is serving a 60-year federal prison term for a child pornography conviction.

By Steve Friess and Joseph Ax