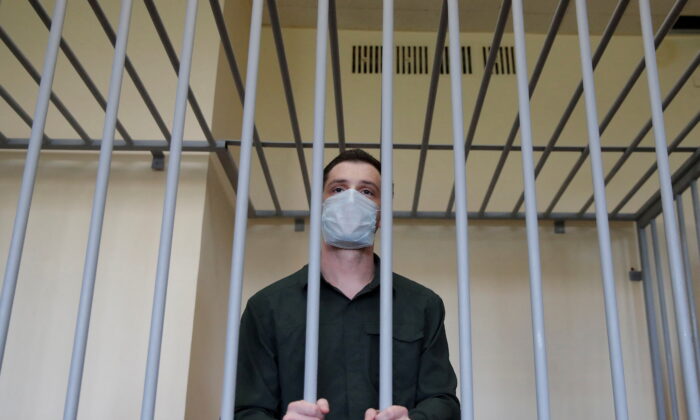 Former U.S. Marine Trevor Reed, who was detained in 2019 and accused of assaulting police officers, stands inside a defendants' cage during a court hearing in Moscow, on July 30, 2020. (Maxim Shemetov/Reuters)
International

Trevor Reed, a former U.S. Marine jailed in Russia, has ended a hunger strike and is being treated in his prison’s medical centre, Russian news agencies reported on Monday, citing the prison service and his lawyers.

Reed, 30, from Texas, is serving a nine-year term after being convicted of endangering the lives of two police officers while drunk on a visit to Moscow in 2019. He denied the charges and the United States called his trial a “theatre of the absurd.”

Reed’s parents said last week that Reed had gone on hunger strike to protest at being put in solitary confinement and not receiving proper medical care despite fears that he had tuberculosis.

“On Friday, April 1, the convict Reed ended his hunger strike and began to receive food. On the same day, at his request, he was sent to the medical facility,” the Federal Penitentiary Service was quoted saying by Interfax and RIA.

Reed’s health is “satisfactory”, the prison service was quoted as saying.

U.S. State Department spokesperson Ned Price said Washington had seen the statement from Russia, adding that it was concerned by reports that Reed’s health was deteriorating.

“We continue to call on Russian officials to provide adequate medical care immediately or otherwise to release him to the United States to receive the care that he needs,” Price said.

Reed’s lawyers said he had ended the hunger strike after being seen by doctors, and that he required medical treatment, Interfax reported.

Reed’s parents said he had been exposed to an inmate with active tuberculosis in December, but their son had not been tested for the illness despite a rapid deterioration in his health.

The prison service said Reed had gone on hunger strike on March 28 to protest disciplinary action against him. It said he had repeatedly tested negative for tuberculosis and had not come into contact with anyone infected.

Reed also went on hunger strike for almost a week last year to protest his incarceration and violations of his rights, which the prison service denied.