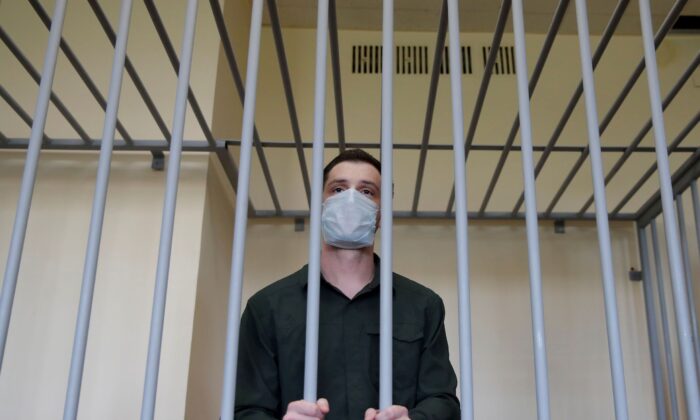 Former U.S. Marine Trevor Reed, who was detained in 2019 and accused of assaulting police officers, stands inside a defendants' cage during a court hearing in Moscow, Russia on July 30, 2020. (Maxim Shemetov/Reuters)
US News

MOSCOW—A former U.S. Marine serving a nine-year jail sentence in Russia has started a hunger strike to protest against his incarceration and alleged violations of his rights, his family said, a statement Russian prison authorities said was untrue.

Trevor Reed, a university student from Texas, was last year convicted of endangering the lives of two policemen in Moscow while drunk on a visit in 2019. He denied the charge and Washington called his trial a “theatre of the absurd.”

“We have received a report from an attorney that Trevor has begun a hunger strike to protest his arbitrary detention and Russian authorities’ numerous and flagrant violations of his basic human rights and his rights under Russian law,” his family said in a statement late on Monday.

Regional prison authorities in Mordovia, where Reed is being held, denied his rights were being abused or that he was on hunger strike. “He is eating in line with the daily schedule,” they said in a statement to Reuters.

The family said that Reed was being held in a small room with a hole in the floor for a toilet, that he had not been allowed to speak to his parents by phone for 116 days, and that he was not being allowed to receive books or letters.

The U.S. Embassy said in a tweet: “We are aware of reports that #TrevorReed is on a hunger strike. We remain very concerned about his treatment & are monitoring closely. We urge the Russian government to do the right thing and return him to his family.”

Reed and Paul Whelan, an American who was jailed in Russia on spying charges he denied, have been touted as possible candidates for a prisoner swap between Moscow and Washington.

Whelan’s lawyer told Reuters on Monday that there had been talks on a deal concerning his client, but they had stalled.

Reed’s family said in its statement it had met officials in Washington last month and urged them to strike a deal with Russia that would see Russians held in U.S. jails freed.

Russian media have touted Konstantin Yaroshenko, a pilot serving 20 years for conspiracy to smuggle cocaine, and Viktor Bout, a Russian arms trafficker serving a 25-year prison sentence, as possible candidates for a deal.

“Both Russian men whom Russian media have floated as potential targets for a ‘trade’ have served more than half of their lengthy sentences and are now senior citizens who would pose no threat to Americans if ‘traded’,” Reed’s family said.