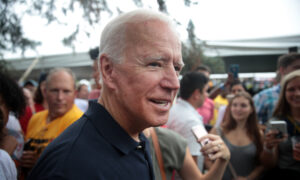 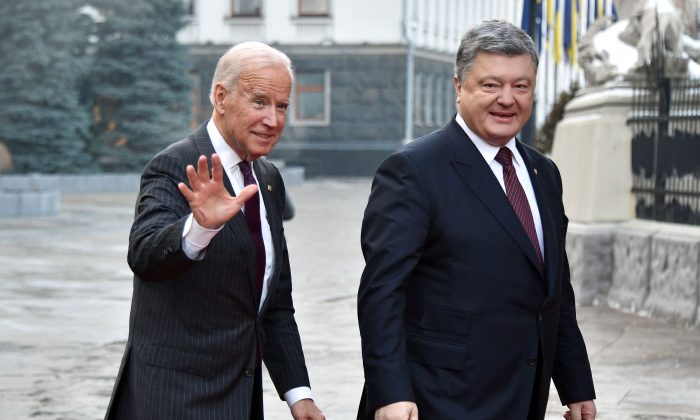 Then Vice President Joe Biden arrives for a meeting with Then Ukrainian President Petro Poroshenko in Kyiv on Jan. 16, 2017. (Genya Savilov/AFP/Getty Images)
Europe

Poroshenko was told by a court amid a tax evasion case to go to the Kyiv Forensics Research Institute on Tuesday, Oct. 1 to take the lie detector test but didn’t show up.

A representative for the institute, Yuriy Irkhin, told reporters that the test was scheduled in the morning and Poroshenko was a no-show, reported Radio Free Europe. The court order was issued in August.

Poroshenko previously told reporters that he would take the test but not at the institute. He wanted the test conducted at the Pryamiy television station, he said, because he doesn’t trust the State Bureau for Investigations.

Irkhin said on Tuesday that it wouldn’t be possible to do a lie detector test live in the studio.

“Unfortunately, forensic examination excludes live broadcasts. We are talking about forensics, but a live broadcast is a television show,” Irkhin said.

Poroshenko was recently called as a witness to a tax evasion case involving the sale of Pryamiy.

According to the radio outlet, Poroshenko received voluminous coverage on Pryamiy while running for re-election earlier this year.

Biden said last year that when he was vice president in 2016 he went to Ukraine and threatened to withhold $1 billion in aid unless the country, which was helmed by Poroshenko at the time, ousted its top prosecutor, Viktor Shokin.

Shokin said in an affidavit released recently that Poroshenko came to him several times and asked him to stop probing Burisma, an energy company. Hunter Biden, Biden’s son, sat on the board of Burisma from 2014 to 2019.

When Shokin declined to drop the investigation, Poroshenko asked him to resign, citing Biden’s threat.

“In my conversations with Poroshenko at the time, he was emphatic that I should cease my investigations regarding Burisma. When I did not, he said that the U.S. (via Biden) were refusing to release the USD$ 1 billion promised to Ukraine. He said that he had no choice,” Shokin wrote.

“The truth is that I was forced out because I was leading a wide-ranging corruption probe into Burisma Holdings, a natural gas firm active in Ukraine, and Joe Biden’s son, Hunter Biden, was a member of the Board of Directors.”