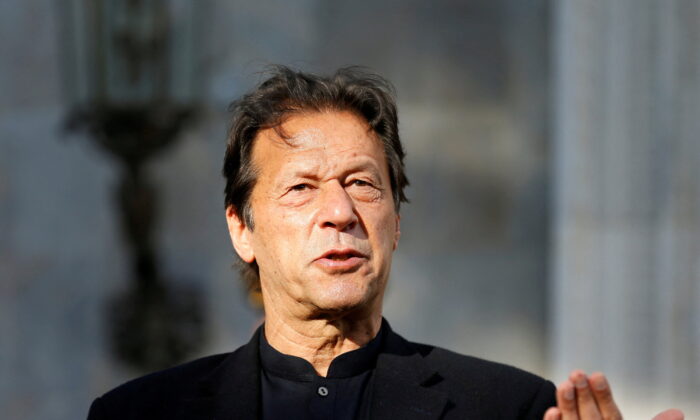 KARACHI, Pakistan—Former Pakistan Prime Minister Imran Khan was summoned on Tuesday to appear in court next week as prosecutors consider charging him with contempt following a weekend speech in which he threatened police officers and a magistrate, officials said.

The possible contempt charge comes on top of charges under an anti-terror law that police filed against Khan over the same televised speech.

Khan had complained about sedition charges an aide faces for allegedly inciting mutiny in the military..

“We will not spare you,” Khan said in the speech that named the police chief and the judge involved in the case against the aide. “We will sue you.”

Khan has been campaigning for new elections since being forced to step down this year but a conviction would disqualify him from standing, legal experts said.

“The court … summons him to appear before the court in person on Aug. 31,” Jahangir Khan Jadoon, Advocate General Islamabad, told Reuters.

The court also asked the Chief Justice at Islamabad High Court to constitute a full court bench to proceed with the contempt case, he added.

The South Asian nation has seen at least one prime minister, and some lawmakers, unseated after such disqualifications.

The use of anti-terrorism laws as the grounds for cases against political leaders is not uncommon in Pakistan, where Khan’s government also used them against opponents and critics.

His political party, the Pakistan Tehreek-e-Insaf (PTI), has dismissed the accusations as being politically motivated, saying they were being used to block him from leading anti-government rallies.

Khan, prime minister from 2018 until losing a confidence vote in parliament in April, came to power with what political analysts said was the support of the military on a conservative agenda that appealed to many middle-class and religious voters.

But analysts said he fell out with the military after a dispute over the appointment of a spy chief.

Khan denied ever having military support and the military, which has ruled Pakistan for more than three decades of its 75-year history, denies involvement in politics.