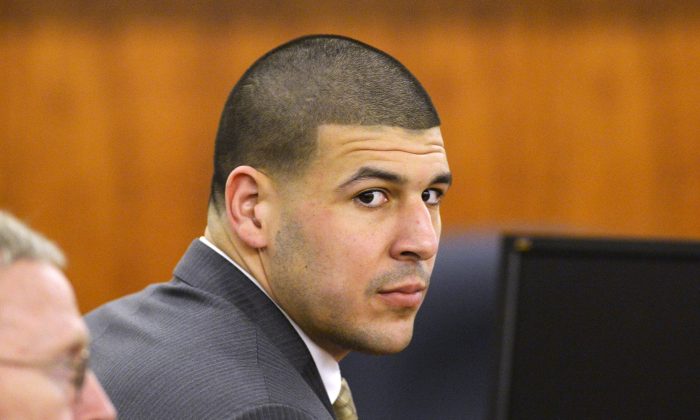 BOSTON—A Boston jury on Friday found former New England Patriots football star Aaron Hernandez not guilty of murdering two men outside a Boston nightclub in 2012, following what prosecutors described as a dispute that began over a spilled drink.

The decision comes two years after another Massachusetts jury found the former National Football League tight end guilty of murdering an acquaintance in an industrial park near his home in June 2013. He is currently serving a sentence of life in prison without the possibility of parole for that killing.

Except for a weapons possession count, Hernandez was found not guilty of all charges associated with the double murder, including witness intimidation. He was immediately sentenced to an additional four to five years in prison on the weapons conviction and led from the courtroom with tears streaking down his face.

Gasps were heard from the gallery when the initial verdicts were read, and members of the victims’ families were led out of the courtroom, also in tears.

“What won this case was a dearth of evidence that connected Hernandez to these shootings,” Ron Sullivan, a member of his defense team, told reporters after the verdicts.

Hernandez, now 27, was a rising star in the National Football League when he was arrested in 2013 and charged with murdering acquaintance Odin Lloyd.

More than a year passed before he was charged with the double-murder, which prosecution witnesses said was the result of his paranoid temperament, which led him to constantly suspect people were disrespecting and challenging him.

The jury heard from witnesses including a friend, Alexander Bradley, who said that he was in the car with Hernandez when the football star shot dead Cape Verdean nationals Daniel Abreu and Safiro Furtado outside the Boston nightclub.

Defense lawyer Jose Baez, best known for successfully defending Florida mother Casey Anthony in the 2011 trial in which she was charged with murdering her daughter, relentlessly hammered Bradley’s credibility, suggesting that he had killed the men and pinned it on Hernandez in exchange for immunity.

He pointed out holes in the prosecution’s case including the absence of forensic evidence tying Hernandez to the shootings – no fingerprints or DNA were found on the gun used in the killing or in the vehicle that Hernandez allegedly fired from.

Baez contended that investigators focused on Hernandez as a suspect because of his fame, and disregarded evidence that pointed away from the NFL star, who had a $41 million contract at the time of his arrest.

“Our theory of this case stands,” he told reporters, “It points inescapably to Hernandez.”