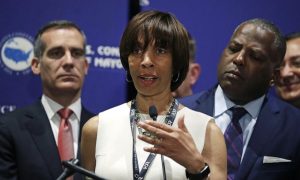 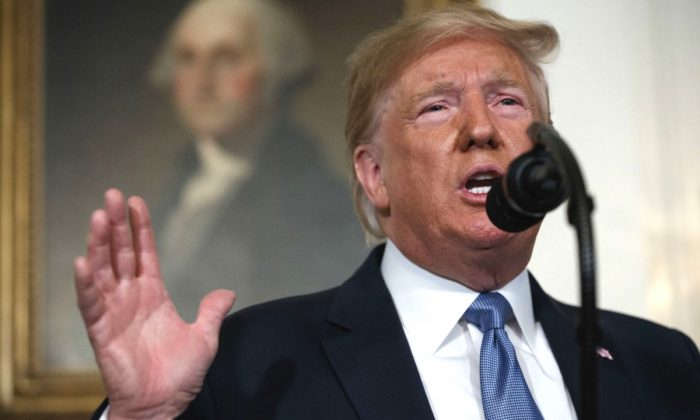 President Donald Trump speaks about the mass shootings in El Paso, Texas and Dayton, Ohio, in the Diplomatic Reception Room of the White House in Washington on Aug. 5, 2019. (Evan Vucci/AP Photo)
Trump Administration

A former NFL player said that he met with President Donald Trump in July and asked the president to call out Rep. Elijah Cummings (D-Md.) for contributing to the issues with Baltimore, part of his Maryland district.

Trump later called out Cummings over the district.

“I had a chance to meet with President Trump, and I told him please call out Elijah Cummings and Baltimore. I asked him to do that three weeks ago and he did it,” said Jack Brewer, a black man who played linebacker from 2002 to 2006, told Fox News.

Brewer said that he visited Baltimore and was impacted by what he saw.

“I’m seeing these kids that don’t have any core, no culture within them. They don’t have anyone teaching them or training them,” Brewer explained. He blamed lawmakers, including Cummings, for focusing on “issues that help them raise money” instead of ones affecting the “poor black kids whose parents are not donating to their PACs and funds.”

Cummings, 68, who has been in office since 1996 and was a state delegate from 1983 to 1996, is “front and center” only when it’s convenient for his political career, Brewer alleged, noting that on the same weekend of the mass shootings in Texas and Ohio, a slew of people were shot in Baltimore.

Trump zeroed in on Cummings on July 14, slamming him over his focus on conditions at the border while Baltimore struggles with one of the highest murder rates in the nation and extreme poverty.

His “district is a disgusting, rat and rodent-infested mess. If he spent more time in Baltimore, maybe he could help clean up this very dangerous & filthy place,” Trump said on Twitter.

“Why is so much money sent to the Elijah Cummings district when it is considered the worst run and most dangerous anywhere in the United States. No human being would want to live there. Where is all this money going? How much is stolen? Investigate this corrupt mess immediately!” he added.

The Trump administration later noted that $16 billion was sent to the district in 2018.

“It’s been misspent. It’s been missing. It’s been stolen with a lot of corrupt government. And as you know, Cummings has been in charge,” the president told reporters.

“I think that Representative Cummings should take his Oversight Committee and start doing oversight in Baltimore. He’d find out some real things,” Trump added.

Trump said it wasn’t racist to criticize Cummings and his defenders noted that the president attacks people of many races.

Cummings has mostly remained silent in the face of withering criticism and allegations of corruption, though he spoke out in early August and asked Trump to visit the city.

“Don’t just come and criticize. Do what these other folks have done,” he said, making reference to the district’s institutional partners such as the University of Maryland.

“They’ve come into our community and they did not say something is wrong with you,” he said during the dedication of a “nature play space.” “They said how can I help? How can I make a difference for generations yet unborn.”