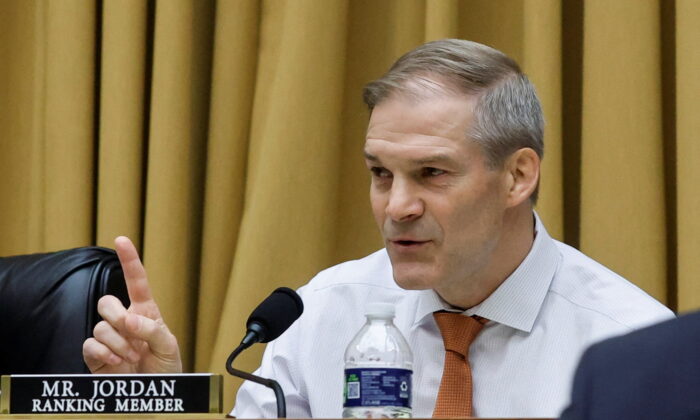 Rep. Jim Jordan (R-Ohio) is calling on former FBI Counterterrorism Division Assistant Director Jill Sanborn to testify regarding whistleblower claims that agents were pressured to reclassify cases as “domestic violent extremism” even if they did not meet the criteria.

In a letter to Sanborn on Aug. 10 the Republican lawmaker, who serves as the ranking member of the House Judiciary Committee, wrote that the whistleblower allegations that the FBI is pushing agents to inflate the numbers of domestic violent extremism cases are among many that he and other members of the committee are investigating that concern “the politicization of the FBI.”

According to Jordan, the whistleblower revealed that Sanborn was among officials in the FBI who allegedly led the pressure campaign on agents to reclassify cases as domestic violent extremism, or DVE.

“One whistleblower explained that because agents are not finding enough DVE cases, they are encouraged and incentivized to reclassify cases as DVE cases even though there is minimal, circumstantial evidence to support the reclassification,” Jordan wrote.

“Another whistleblower stated that a field office Counterterrorism Assistant Special Agent in Charge and the FBI’s then Assistant Director of the Counterterrorism Division pressured agents to move cases into the DVE category to hit self-created performance metrics. This whistleblower identified you as one official who exerted pressure on agents to reclassify cases as DVE matters.”

“Your testimony is necessary to advance our oversight, we, therefore, ask that you contact the Committee to schedule a transcribed interview as soon as possible but no later than 5.00 p.m. on August 24, 2022,” he wrote in the letter, which was also signed by Rep. Mike Johnson (R-La.).

An FBI spokesperson told The Epoch Times: “The threat posed by domestic violence extremists is persistent, evolving, and deadly. The FBI’s authority to investigate a case as domestic terrorism requires the existence of a potential criminal federal violation, the unlawful use or threat of force or violence, and ideological motivation. The motivation behind threats or acts of force or violence in violation of federal criminal law is not always readily apparent, but is often discovered during the course of an investigation.

“If the FBI obtains evidence that someone was motivated by violent extremist ideology of any type, a case classification may be changed. In other cases, an investigation may indicate that an ideological motivation was not involved in a criminal act. In either case, the FBI will follow the facts as they develop, and classify our investigations accordingly and appropriately. The FBI’s goal is to detect and stop terrorist attacks. At the same time, we are committed to upholding the constitutional rights of all Americans and will never open an investigation based solely on First Amendment protected activity.”

“Given the narrative pushed by the Biden Administration that domestic violent extremism is the ‘greatest threat’ facing our country, the revelation that the FBI may be artificially padding domestic terrorism data is scandalous,” the lawmaker wrote in his letter to Wray.

According to the FBI, domestic violent extremist is defined as “an individual based and operating primarily within the United States or its territories without direction or inspiration from a foreign terrorist group or other foreign power who seeks to further political or social goals wholly or in part through unlawful acts of force or violence.”

The Biden administration has said that domestic terrorism is the most urgent threat currently facing the United States.

Following the Jan. 6 breach of the U.S. Capitol, the creation of a new unit in the Justice Department to counter domestic terrorism was announced. At the time, officials said that the number of FBI investigations of suspected violent extremists had more than doubled since the spring of 2020.

However, Jordan is among a number of Republican lawmakers who have expressed concerns that both the Justice Department and FBI have become politicized.

The lawmakers’ letter to Sanborn comes shortly after the Florida Mar-a-Lago home of former President Donald Trump was raided by FBI agents, prompting Republican leaders to condemn the move and accuse the Biden administration again of weaponizing the Justice Department for political purposes.