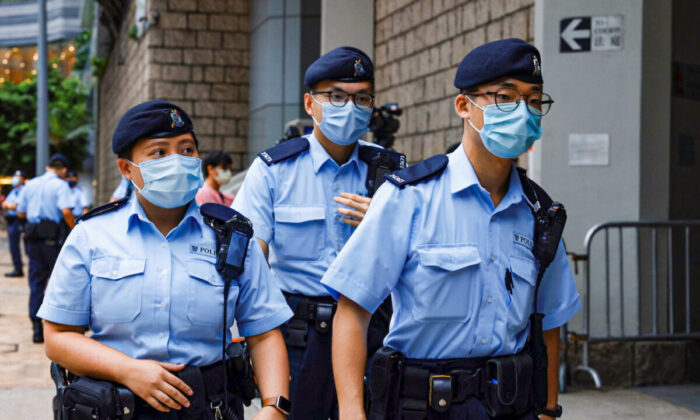 The Hong Kong-based Wen Wei Po reported that Paul Harris had been summoned to a police station in the city’s Wanchai district, with Harris shown walking into the police station in a video posted on its website.

The report on Wednesday also carried a second video of Harris at Hong Kong International Airport pushing a trolley with suitcases. In the video, Harris was asked by a reporter whether he was afraid of being arrested, but he didn’t comment. Reuters could not confirm when either video was filmed.

Another state-backed newspaper, Ta Kung Pao, said in a separate report on Wednesday that Harris had left Hong Kong after being called in to meet police for an “alleged violation” of the national security law.

Harris confirmed to Reuters in a phone message that he had left the city, but gave no further details.

“Yes, on way to see my mother in England,” he said. Harris declined to answer any further questions from Reuters.

Harris stood down in January from the Bar Association, a professional body representing Hong Kong’s 1,500 barristers, without seeking reelection.

Harris’s year-long term was marked by criticism from Hong Kong and Beijing officials and repeated attacks in state-backed media.

Harris, a senior counsel, had commented on jail terms for several democracy activists last year and the sweeping national security law that the Chinese regime imposed on the city in June 2020.

Two of Harris’s fellow barristers said he had been planning for some time to leave Hong Kong in March, but it was not known for how long.

The national security law expands police powers of search and surveillance, and punishes—with up to life imprisonment—acts of what the Chinese communist regime deems as subversion, terrorism, collusion with foreign forces, and secession.

Harris had been involved in several cases related to the law.

A Bar Association spokesperson said the group was “ascertaining the situation and has no comment at this stage.”