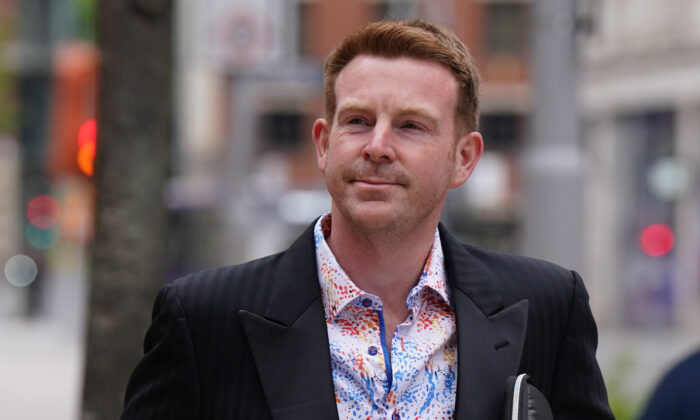 Ex-BBC DJ Jailed for Stalking Presenter Jeremy Vine and Others

A former BBC local radio DJ and YouTube host has been jailed for over five years after being convicted of stalking charges against four people including the broadcaster Jeremy Vine.

On Aug. 5, Alex Belfield, 42, was found guilty of a stalking campaign at a trial at Nottingham Crown Court where it was found that he had “weaponised the internet” against those he targeted.

On Friday, he was jailed for five years and 26 weeks.

“This is not a regular troll here. This is the Jimmy Savile of trolling,” Channel 5 and BBC Radio 2 presenter Jeremy Vine told the court at the time, adding he was subjected to an “avalanche of hatred.”

Jurors found Belfield, of Mapperley, Nottingham, guilty of four charges committed between 2012 and 2021.

The court heard he caused serious alarm or distress to two victims and was found guilty of “simple” stalking in relation to Vine and theatre blogger Philip Dehany. BBC Radio Northampton presenter Bernie Keith said he was left feeling suicidal by a “tsunami of hate.”

Vine said in court of Belfield’s conduct that “it felt like I had a fish hook in my face and my flesh was being torn, and the only way to avoid further pain was to stay completely still.”

On Twitter, videographer Ben Hewis posted his victim statement, adding that he was “thrilled justice has been served.”

“For almost three years I’ve been subjected to the most painfully personal attacks. Belfield has waged a relentless, multi-pronged intimidation and harassment campaign that has left me psychologically and emotionally drained of the vim and vigour that defined my character before” Hewis wrote.

During sentencing, Mr. Justice Saini told Belfield, “Your offences are so serious, only a custodial sentence can be justified.”

The judge added that while not “traditional stalking,” Belfield’s “methods were just as effective a way of intimidating victims and in many ways much harder to deal with.”

A pre-sentence report found that Belfield “fully acknowledges the distress to victims,” but “highlights you still appear to focus on the impact on you and feel in certain respects you’ve been unfairly treated.”

Saini added there was “no escape” for Belfield’s victims, until bail conditions were imposed ahead of his trial, and agreed with Vine’s characterisation that he had “weaponised the internet” against those he targeted.

The judge also ordered indefinite restraining orders be made against Belfield, in favour of his victims and four other individuals.

Belfield also has a YouTube channel called “The Voice of Reason” with 361,000 followers. In an August video statement after his conviction, he said that he will be coming off the platform.