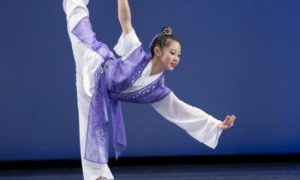 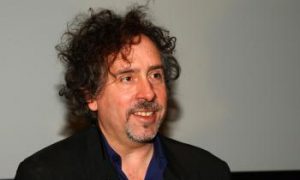 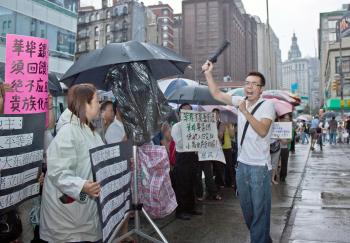 Tony Tsai, of the Coalition to Protect Chinatown, riles up a crowd infront of East Bank in protest of rezoning of the area. (Cliff Jia/The Epoch Times)
US

In a light drizzle, Yang Lirong, 57, stood with her daughter and two-year-old grandson on the steps of her apartment building. After living at this location with her family for two years, Yang has been evicted and is currently engaged in legal proceedings with a landlord she has never met.

Yang’s name is not on the lease. She took the apartment over from an acquaintance, and the landlord would not change the name on the lease. The landlord did renew the lease under the previous tenant’s name, however. Yang hopes to prove residency in court and keep her home.

Two other residents in this 20-apartment, rent-stabilized building are experiencing similar pressure from the landlord to move out.

Esther Wang, project director for Chinatown Tenants Union, says refusing to change the name on the lease makes the tenant more vulnerable and gives the landlord more power to empty the apartment, so that he or she could renovate it and increase the rent.

“Our experience has been that landlords start with one group and try to clear out the building in waves,” says Wang of what she calls the “gentrification” of the area.

Committee Against Anti-Asian Violence, an organization that advocates for the Asian immigrant population of New York on a variety of matters, released a report in 2008, which found that 75 percent of Chinatown residents had experienced some form of landlord harassment or received a serious housing violation within the previous year.

Chen Jianzhong, who also attended the protest on Sunday, says he experienced such harassment two years ago when he left his apartment at 81 Bowery St. Tenants in a few buildings on Henry Street say they are currently experiencing similar issues.

Ownership of 164 Henry St. changed hands in August. Tenants there have not met the new landlord; nor do they know his or her name. The owner is part of the Monroe Henry Limited Liability Company (LLC).

LLC has been a controversial business structure for real estate ownership, explained Wang, because the landlord can maintain anonymity, though they may be the sole member of the company.

According to the IRS website, LLCs are “popular because, similar to a corporation, owners have limited personal liability for the debts and actions of the LLC.”

The building was previously owned by the notorious landlord Baruch Singer, who was the sole member of more than 100 LLCs, each formed to manage a different property, according to a Memorandum of Opinion from the United States Bankruptcy Court. Building conditions were deplorable under Singer, with heating problems and general disrepair, said Wang. Several online publications, including the Manhattan Real Estate website, call Singer a “slumlord.

“At least the landlord [Baruch] knew I was living here, he didn’t try to kick me out,” Wang translated for Yang.

Yang pays $708 per month for her studio apartment and says she could not afford to take her daughter and sickly grandson elsewhere.

“One issue with tenants, particularly immigrant tenants, going to court [is that] language is a barrier,” said Wang, adding that “there is also a financial barrier.”

Zheng Yutang, 68, has lived in the same building for 10 years and is now being evicted because the lease is in his son-in-law’s name. He shares the cramped space—the kitchen and living room are one, and some sleeping space is tucked away to the side in an elevated cubby hole—with his wife and three grandchildren. He pays $800 per month.

“If I have to move, where would I move to? Where could I afford rent anywhere else?” Zheng asked, as translated by Wang.

Jiang Wulian has lived at 164 Henry for 15 years. He received a notice of eviction last week, which gives him only 10 days to move out. The basis of the eviction is that he has too many people occupying his apartment, explained Jiang. However, he says that he lives there only with his wife and son, who is a part-time resident.

The lease is in Jiang’s name, and like the other two tenants being evicted, he has always paid his rent in full and on time.

Jiang is paying $730 a month for a two-bedroom apartment, although he says the landlord informed him that he must start paying $1,200 if he wishes to stay.

The three tenants are currently contesting the evictions. The building owner’s attorney, Lawrence J. Silberman, did not respond to inquiries by press deadline.