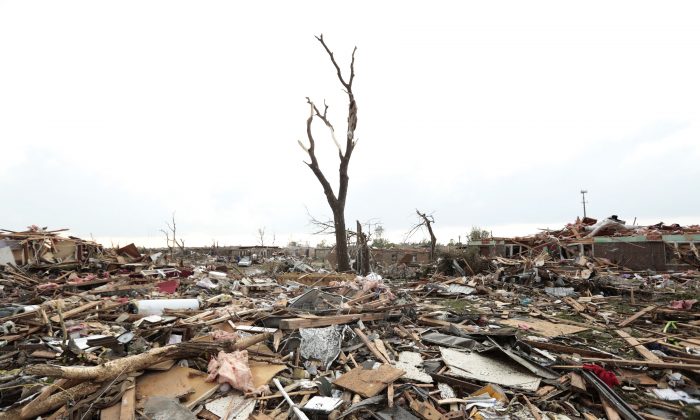 Massive piles of debris cover the ground after a powerful tornado ripped through the area on May 20, 2013 in Moore, Oklahoma. The tornado, reported to be at least EF4 strength touched down in the Oklahoma City area on Monday killing at least 51 people. (Brett Deering/Getty Images)
Special

‘Everyone in Moore will know someone who has lost a house’

A monstrous tornado at least a half-mile wide roared through the Oklahoma City suburbs Monday, flattening entire neighborhoods and destroying an elementary school with a direct blow as children and teachers huddled against winds up to 200 mph.

At least 51 people were killed, and officials said the death toll was expected to rise.

UPDATE: The official death toll was revised down by authorities on Tuesday to 24, including 9 children.

The storm laid waste to scores of buildings in Moore, a community of 41,000 people about 10 miles south of the city. Block after block lay in ruins. Homes were crushed into piles of broken wood. Cars and trucks were left crumpled on the roadside.

“Everyone in Moore will know someone who has lost a house,” Liz Langford, 33, said by phone from Moore on Monday night. “It is heartbreaking for the whole city because it is a close knit community.”

Langford, an English teacher at Southmoore High School, left school early to run an errand on Monday afternoon. She described the storm as “odd” in that it popped up quickly. “If you looked at the radar, you didn’t think anything would happen. But that is the nature of tornados.”

When she heard the sirens, and realized she could not make it home, she drove through the hail and downpour to her parents house to take shelter. She turned on the television to watch the weather, when the power went out. She knew it was time to seek shelter.

Like many of the homes in Oklahoma, her family’s home did not have a basement, so she took shelter in the middle of the house.

After the storm passed, she peered outside, seeing the clouds raising back into the sky. “[Outside the house] I didn’t see that much debris, but if you go three major streets up, there are neighborhoods wiped out,” Langford said.

The National Weather Service said the tornado was an EF-4, the second most powerful twister.

More than 120 people were being treated at hospitals, including about 70 children.

Langford said she could not venture to the areas hardest hit because police had blocked the area off and were not letting anyone in or out. She also said she did not want to complicate the rescue efforts.

At Plaza Towers Elementary School, the storm tore off the roof, knocked down walls and turned the playground into a mass of twisted plastic and metal.

Plaza Towers Elementary School is a feeder school for the high school Langford teaches at. “I am assuming a lot of our kids are going to be ones that will be without a home,” Langford said.

As of 9:30 p.m. Monday night, she had not heard if there would be classes at Southmoore High School on Tuesday, but she was not optimistic.

UPDATE: Checking in with Langford again at 11:15, she said she learned school was cancelled.

“We need your prayers. There are ways to donate, but positive thinking and prayers would be wonderful,” Langford said.