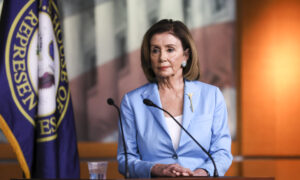 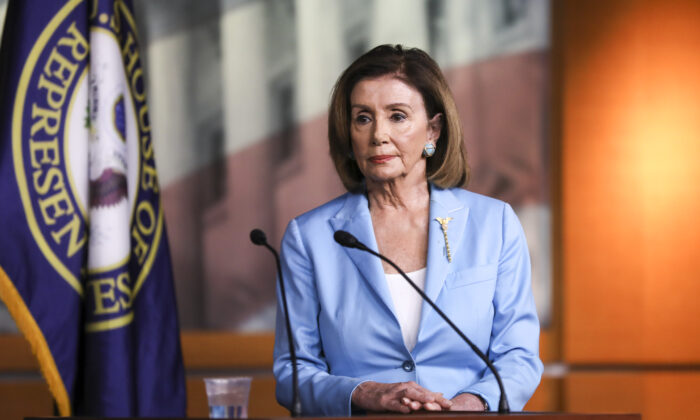 Speaker of the House Nancy Pelosi (D-Calif.) at a press conference about the impeachment inquiry of President Trump, at the Capitol in Washington on Oct. 2, 2019. (Charlotte Cuthbertson/The Epoch Times)
Politics

‘Everybody Has Read Your Words’: Pelosi Responds to Trump Urging People to Read Transcript

House Speaker Nancy Pelosi (D-Calif.) responded to President Donald Trump’s urging of people to read the transcript of his phone call with Ukrainian President Volodymyr Zelensky, saying, “Everybody has read your words on the call.”

Trump on Tuesday decried the “impeachment hoax” and repeatedly said people should read the transcript of the call.

“Just read the Transcript, everything else is made up garbage by Shifty Schiff and the Never Trumpers!” he wrote in one of multiple posts on Twitter, referring to House Intelligence Chairman Adam Schiff (D-Calif.) and people opposed to him no matter what happens.

“How many more Never Trumpers will be allowed to testify about a perfectly appropriate phone call when all anyone has to do is READ THE TRANSCRIPT! I knew people were listening in on the call (why would I say something inappropriate?), which was fine with me, but why so many?” he wrote in another.

Everybody has read your words on the call. The Ukrainian President asks for military aid to fend off the Russian attack, you say “I want you to do us a favor though,” and then you spend the rest of the call asking for bogus investigations to smear your political opponents. https://t.co/vI2eD4T6vK

Pelosi responded to that tweet, writing, “Everybody has read your words on the call. The Ukrainian President asks for military aid to fend off the Russian attack, you say ‘I want you to do us a favor though,’ and then you spend the rest of the call asking for bogus investigations to smear your political opponents.”

Zelensky in the July call thanked Trump for supporting Ukraine’s defense efforts before saying the country was “ready to continue to cooperate for the next steps.”

“Specifically, we are almost ready to buy more Javelins from the United States for defense purposes,” he added, according to the transcript.

“I would like you to do us a favor though because our country has been through a lot and Ukraine knows a lot about it. I would like you to find out what happened with this whole situation with Ukraine, they say Crowdstrike… I guess you have one of your wealthy people… The server, they say, Ukraine has it,” Trump responded.

“There are a lot of things that went on, the whole situation. I think you’re surrounding yourself with some of the same people.”

Ukrainian officials have admitted interfering in the 2016 U.S. presidential election, with some stating they wanted Trump to lose to Democratic candidate Hillary Clinton. A court in Ukraine ruled last year that the release of documents allegedly showing financial transactions of Trump campaign chairman Paul Manafort constituted improper interference in the election.

Trump later in the call asked Zelensky to “look into” former Vice President Joe Biden and Biden’s son, Hunter Biden, who sat on the board of Ukrainian energy company Burisma for five years through 2019.

“There’s a lot of talk about Biden’s son, that Biden stopped the prosecution and a lot of people want to find out about that so whatever you can do with the Attorney General would be great. Biden went around bragging that he stopped the prosecution so if you can look into it… It sounds horrible to me,” Trump said, referring to Biden telling a crowd last year that he threatened to withhold $1 billion in aid from Ukraine in 2016 unless then-President Petro Poroshenko ousted prosecutor Viktor Shokin, who was probing Burisma.

Zelensky said he would appoint a new prosecutor in September and “he or she will look into the situation, specifically to the company that you mentioned in this issue.” Ukraine’s new prosecutor general said on Oct. 4 that his office is reviewing cases that were investigated previously, including the case of Burisma.