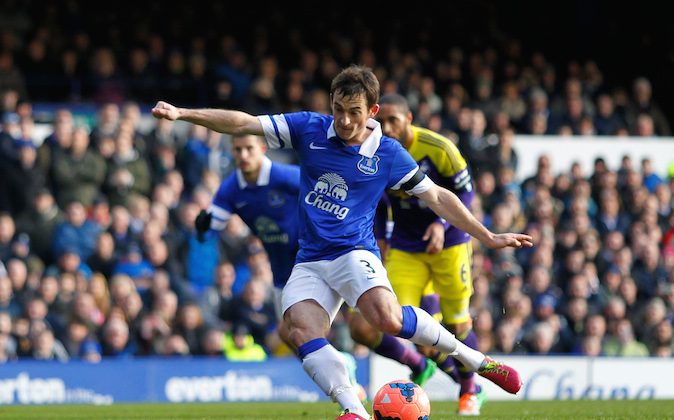 Leighton Baines of Everton scores a goal from the penalty spot during the FA Cup Fifth Round match between Everton and Swansea City at Goodison Park on February 16, 2014 in Liverpool, England. (Photo by Paul Thomas/Getty Images)
Soccer

The game will also air on Directv, TalkSport Radio and Premier League Extra Time in the United States.

With 10 games still to play this season, Everton still has a chance of securing European qualification. The Merseyside club has extended its shirt sponsorship deal with Thai beer company Chang, which is now worth more than 16 million pounds ($26 million) over the next three years. But club manager Roberto Martinez insists his team’s results in its final matches will have a stronger impact on his transfer plans during the offseason.

“Obviously the sponsorship deal with Chang is a relationship which has been over 10 years and you don’t get these relationships in Premier League clubs and we value that,” Martinez said. “We are in that key moment of the campaign with 30 points to play for. Whatever happens in the summer will be the next step but many of the decisions will depend on how we do in the next 10 games so you can imagine the focus goes into those games.”

Everton hosts Swansea on Saturday on the back of two consecutive wins.