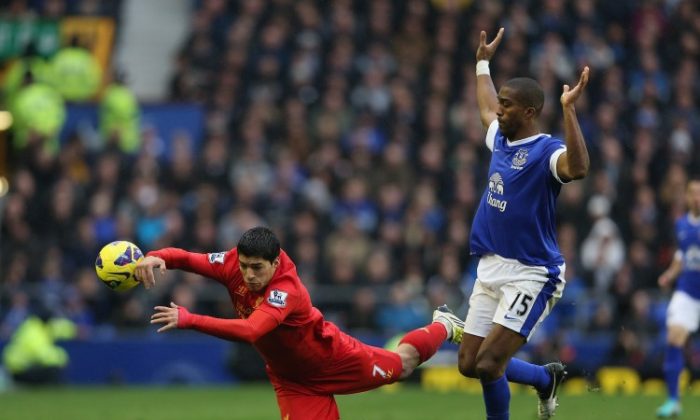 Everton Fights Back to Draw Liverpool in Merseyside Derby

Luis Suarez was front and center in a 2–2 draw at a wet and miserable Goodison Park in front of a capacity 39,000 crowd on Sunday afternoon. The 219th Merseyside derby saw Liverpool jump out to a shock 2–0 lead before the home side came back to secure a share of the points. All the goals came in a frenetic first half.

Liverpool has won 18 derby matches to Everton’s 9 since the inception of the Premier League, including four of the last five at Goodison Park. However, David Moyes’ side have made their best start to a season in eight years and held down fifth place—six points clear of Liverpool—whose indifferent start to the campaign finds them languishing in 13th place at the start of the match. Consequently, Everton was in the unusual position of starting the match as favorites.

Pepe Reina was on the bench, but apparently not 100 percent fit, so Brad Jones kept his place between the Liverpool uprights. England international Glen Johnson was also on the injured list so Jose Enrique received a recall. Brendan Rodgers kept faith with his three teenagers with Andre Wisdom, Suso, and Rahim Sterling all remaining in the starting lineup.

Everton was given a huge boost with the return of Marouane Fellaini, but would have to manage without the suspended Steven Pienaar. Scottish international Steven Naismith would patrol the right flank with Belgian Kevin Mirallas on the left.

The match began in typical derby fashion with corners at each end before there was even three minutes on the clock. A tremendous run from Mirallas after nine minutes was a delight to witness, but there was no end product.

Five minutes later, Enrique took off down the left and whipped a low cross into the Everton 6-yard box where Luis Suarez was waiting. The Uruguayan’s shot was actually going wide but deflected off the inside of Leighton Baines leg and into the net.

Twenty minutes gone and a foul on Rahim Sterling 35 yards out gave Steven Gerrard the opportunity to curl in one of those renowned free kicks. The Everton marking was slack and it was Suarez, the shortest man in the area, who was first to the ball. His glancing header gave the “underdogs” an unlikely two-goal advantage.

Everton was stung into action and immediately put Jones under pressure. The reserve Liverpool keeper was looking somewhat shaky, and a weak punch fell to Leon Osman just outside the area. The Everton midfielder expertly threaded his shot through the crowd and pulled one back for the Toffees.

As the half wore on Everton started to dominate and it appeared to be only a matter of time before an equalizer came. At the 34-minute mark, the two Belgians combined in unusual fashion to create an opening.

A Mirallas cross from the left actually hit Fellaini who managed to gain control, turn, and put the ball right into the danger area where Naismith was waiting eagerly to open his Everton account.

Liverpool was somewhat aggrieved because, just prior to the move that led to the goal, a throw-in was awarded to Mirallas despite the fact that the video replay showed that the ball had touched the Everton player last.

Both defenses tightened up in the second half but there was still plenty of cut and thrust and chances at both ends, even if the high drama of the first period was lacking.

Suarez continued to look sharp for the visitors and was arguably the outstanding player on the field. Regrettably, the South American showed us the ugly side of his game on 71 minutes when he cynically trod on the ankle of Sylvain Distin with the ball well out of the picture.

It was the sort of challenge that could have caused serious injury but thankfully Distin was all right. This fixture has produced more red cards than any other Premier League pairing, and Suarez was fortunate that the card shown to him by referee Andre Mariner was only yellow. That was the sixth yellow of the afternoon and there would be one more to the total before proceedings drew to a close.

Liverpool almost nicked it in the last minute of stoppage time when Suarez had the ball in the Everton net from another Gerrard free kick, but it was controversially disallowed. The visitors again felt hard done by, but it would have been harsh on Everton who certainly deserved their point.

That point takes the Toffees back to fourth in the table, while their Merseyside rivals jump two places to 11th.

Notwithstanding that nasty foul and a dubious first half goal celebration right in front of the Everton bench, Luis Suarez was named man of the match. From a purely footballing standpoint, it cannot be denied that he was the outstanding player on the park over the 90 minutes, but it has to said that he probably should not have been on the field for the last 20.

This was not the most cultured display of football that we’ll see this season, but for entertainment value it could not be faulted.