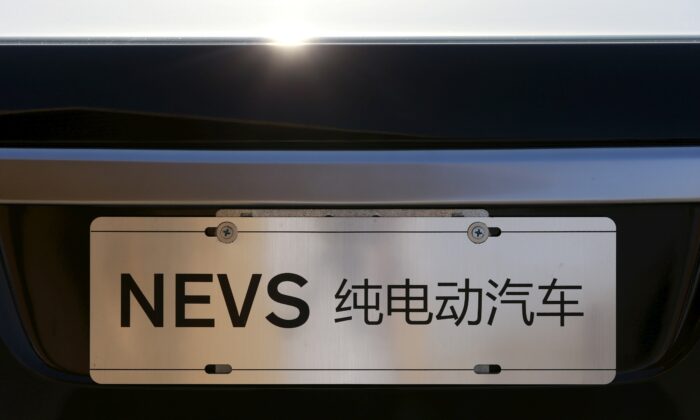 The National Electric Vehicle Sweden (NEVS) logo is pictured on one of its electric cars at its Beijing headquarters building in China on Dec. 28, 2015. (Kim Kyung-Hoon/Reuters)
China

STOCKHOLM—The Swedish electric vehicle unit of China Evergrande Group is in talks with U.S. and European venture capital firms and industrial partners to find new owners, its top chief said, as its Chinese parent battles default on more than $300 billion in debts.

National Electric Vehicle Sweden AB (NEVS), owned by the cash-strapped Chinese property developer, has funds to last “for a good while,” its Chief Executive Stefan Tilk said, adding that several investors were showing interest in the firm.

He declined to comment on a possible valuation. A source familiar with the situation told Reuters the unit could be valued at as much as $1 billion.

Evergrande has already missed three rounds of interest payments on its international bonds, and has been scrambling to sell some of its assets to raise cash.

The Chinese property developer has spent billions of dollars on stakes in automobile technology developers, including NEVS. It also has joint ventures with Germany’s Hofer and Sweden’s Koenigsegg.

Tilk said that NEVS is discussing a potential sale or other financing mainly with European and U.S. firms, but declined to name them.

“We are in dialogue both with venture people and companies that have the same idea and direction as us and want to get into this with our full competence,” he told Reuters. “So they are both industrial partners and venture capitalists.”

Evergrande NEV warned in stock exchange filings last month that it was still looking for new investors and to make asset sales, and that without either it may struggle to pay employee salaries and cover other expenses.