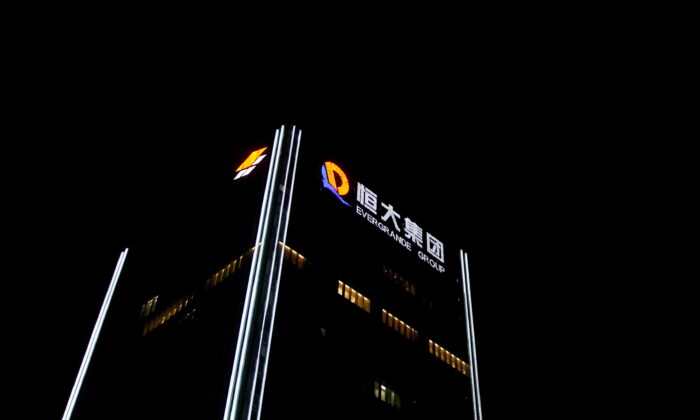 SHANGHAI/BEIJING/HONG KONG—China Evergrande Group missed paying bond interest due on Wednesday, two bondholders said, its second unpaid offshore debt obligation in a week, although the cash-strapped company on Thursday made a partial payment to some of its onshore investors.

The company, reeling under a debt pile of $305 billion, was due on Wednesday to make a $47.5 million bond interest payment on its 9.5 percent March 2024 dollar bond, after having missed $83.5 million in coupon payments last Thursday.

With liabilities equal to 2 percent of China’s GDP, Evergrande has sparked concerns its woes could spread through the financial system and reverberate around the world, though worries have eased somewhat after the central bank vowed to protect homebuyers’ interests.

The central bank on Wednesday urged financial institutions to cooperate with relevant departments and local governments to maintain the “stable and healthy” development of the real estate market and safeguard housing consumers’ interests.

Evergrande’s silence on its offshore payment obligations has, however, has left global investors wondering if they will have to swallow large losses when 30-day grace periods end for coupons that were due on Sept. 23 and Sept. 29.

Some offshore Evergrande bondholders had neither received interest payments nor any communication by the end of Wednesday New York time, said the people familiar with the matter, who declined to be identified due to sensitivity of the issue.

A spokesperson for Evergrande did not have any immediate comment. Reuters was unable to determine whether Evergrande has told bondholders what it plans to do regarding the coupon payment due on Wednesday.

The developer’s treatment of offshore investors, however, contrasts with the way the company is managing its onshore liabilities.

The payment was made on Thursday and relevant funds have been issued to investors’ accounts, Evergrande said in a notice posted on its website. It did not specify how much money was paid.

The two missed offshore payments come as the company, which has nearly $20 billion in offshore debt, faces deadlines on dollar bond coupon payments totaling $162.38 million in the next month.

Once China’s top-selling developer, Evergrande is now expected to be one of the largest-ever restructurings in the country. It has been prioritizing its onshore liabilities amid concerns that its troubles could trigger social unrest.

“I can’t see there being much willingness to give a fairer outcome to offshore bondholders rather than onshore banks, let alone house buyers and people who have lent onshore through the personal loan structures,” said Alexander Aitken, a partner at Herbert Smith Freehills in Hong Kong.

“Of course legally there is also structural subordination from being offshore, which means lenders to Evergrande’s onshore subsidiaries get paid before lenders to the parent company or any offshore debt issuer.”

The Chinese regime is unlikely to intervene directly to resolve Evergrande’s crisis in the form of a bailout, but analysts say it is wary of a messy collapse that could fuel unrest.

Some instant messaging groups used by people owed money by Evergrande to organize protests and discuss claims have been blocked on Tencent Holdings’ WeChat platform, group members said on Wednesday.

Disgruntled home buyers, investors, and suppliers have staged protests at Evergrande offices this month, although authorities have clamped down on such activity. On Thursday there was a visible police and security presence outside Evergrande’s headquarters in the southern city of Shenzhen.

Authorities have in recent days prodded government-owned firms and state-backed property developers to purchase some Evergrande assets to reduce such risks.

Evergrande said on Wednesday that it would sell a ¥9.99 billion ($1.5 billion) stake it owns in Shengjing Bank Co Ltd to a state-owned asset management company.

The bank, one of Evergrande’s main lenders, demanded all net proceeds from the sale go towards settling the developer’s debts with Shengjing, which had ¥7 billion ($1.5 billion) in loans to Evergrande as of the first half last year.

Separately, Evergrande’s Pearl River Delta business said in a WeChat post on Tuesday that construction had resumed on nearly 20 developments in the area. The post showed photos of various sites, and said that work resumption had accelerated since Evergrande vowed at the beginning of the month to deliver homes to buyers.

Evergrande’s shares opened sharply higher on Thursday, rising as much as 5.21 percent before reversing course to slump as much as 7.17 percent. The stock ended down 4 percent.

“Regardless of how the debt is restructured, Evergrande shareholders and investors in offshore, USD-denominated corporate bonds will suffer large losses,” said Jing Sima, chief China strategist at BCA Research in a note.