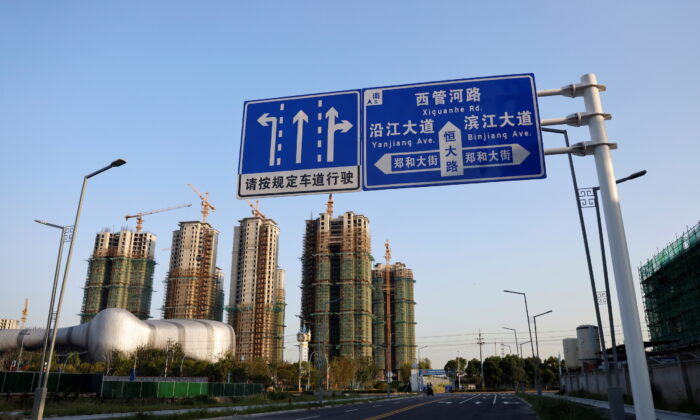 SINGAPORE/SHANGHAI—China’s Evergrande Group has left global investors guessing over whether it will make a key interest payment, adding to fears that Beijing will let overseas bondholders swallow large losses as a liquidity crisis deepens for the world’s most indebted property company.

Evergrande owes $305 billion, has run short of cash, and investors are worried a collapse could pose systemic risks to the Chinese regime’s financial system and reverberate around the world.

A Thursday deadline for paying $83.5 million in interest on a dollar bond passed without remark from Evergrande.

The firm has a 30-day grace period and will default if that passes without payment.

Evergrande’s behavior on the dollar bond interest payment and another $47.5 million payment due next week contrasts with its treatment of its domestic investors. The company this week resolved one coupon payment on a domestic bond.

“This is part of the tactics of any sovereign driven restructuring process—keeping people in the dark or guessing,” said Karl Clowry, a partner at Addleshaw Goddard in London.

“The view from Beijing is offshore bondholders are largely Western institutions and so can justifiably be given different treatment. I think people think it’s still a falling knife,” said Clowry.

The Chinese regime’s central bank again injected cash into the banking system on Friday, Sept. 24, seen as a signal of support for markets. But authorities have been silent on Evergrande’s predicament, and the regime’s state media has offered no clues on a rescue package.

“These are periods of eerie silence as no-one wants to take massive risks at this stage,” said Howe Chung Wan, head of Asia fixed income at Principal Global Investors in Singapore.

“There’s no precedent to this at the size of Evergrande … we have to see in the next ten days or so, before China goes into holiday, how this is going to play out,” said Wan.

Evergrande appointed financial advisers and warned of default last week and world markets fell heavily on Sept. 20 amid fears of contagion, though they have since stabilized.

An Evergrande collapse could crush a property market that accounts for 40 percent of Chinese household wealth.

Protests by disgruntled suppliers, home buyers, and investors last week, illustrated discontent that could spiral in the event a default sparks crises at other developers.

Global markets on Friday seemed rattled by the missed payment and regulatory silence.

Only some $20 billion of Evergrande’s debts are owed offshore. Yet the risks at home are considerable because of the threat to China’s property sector and because the company’s liabilities spread across bank balance sheets and beyond.

So far there have been few signs of official intervention. The People’s Bank of China’s $42 billion cash injection this week is the largest weekly sum since January.

Some banks, insurers, and shadow banks have begun urgent checks on their exposure to the troubled sector.

“We are concerned about the spillovers into the real economy and broader credit conditions,” said an analyst at Societe Generale in a note. “The longer policymakers wait before acting, the higher the hard-landing risk.”

Evergrande’s shares handed back some Thursday gains on Friday and fell 13 percent, while stock of its electric-vehicle unit dropped 20 percent to a four-year low. Its bonds fell slightly on Friday.

“It is clear now that Evergrande will make use of the 30-day grace period, to see if there is any further development” said Jackson Chan, assistant manager of fixed income research at research portal Bondsupermart.