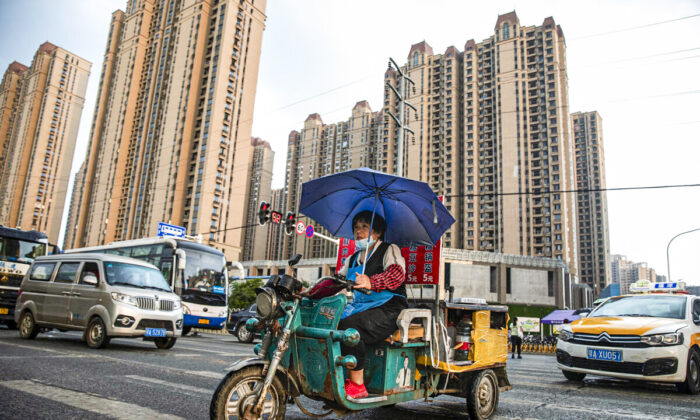 A vendor cycles through the Evergrande Changqing community in the rain on Sept. 24, 2021 in Wuhan, Hubei Province, China. ( Getty Images)
Thinking About China

Evergrande Crisis: Another Opportunity for Beijing to Exert Control

What a credit downgrade means for China’s beleaguered property sector

Chinese leader Xi Jinping vowed to rein in China’s real estate sector and keep housing affordable. He said, “Houses are for living in, not for speculation.”

While affordable housing would be nice, this is one more step away from free markets, and another example of the Chinese Communist Party (CCP) tightening its control over civil society.

Experts are using terms like “controlled landing” or “limited detonation” to express their belief that the CCP will prevent an Evergrande collapse from taking down the whole Chinese economy, and spilling over to the rest of the globe. Far from comforting, this raises the issues of market control and counting on the CCP to save the world.

Fitch rating agency downgraded property developers Evergrande and Kaisa, cutting their rating to “restricted default” after they both missed payments. Kaisa is carrying $12 billion of debt and missed payments of $400 million in offshore bonds. The company is meant to be organizing a restructuring of payments, but few details are available. Kaisa is expected to sign a non-disclosure agreement (NDA) with leading financial advisory and asset management firm, Lazard, which represents a group of shareholders.

Evergrande has $300 billion of debt, including offshore bonds of $19 billion, which are similarly threatened with default. The company has already missed $82.5 million in bond payments.

An Evergrande default could cause a severe downturn in the property sector, which accounts for up to 30 percent of the Chinese economy. Experts claim that Chinese regulators have been working to manage the Evergrande crisis as a “limited detonation,” minimizing the fallout damage to the rest of the financial sector.

Since the beginning of the Evergrande saga, a number of smaller real estate companies have gone bankrupt. In spite of a widely reported belief that the CCP will intervene, so far, no state-owned property firms have stepped in to increase Evergrande’s liquidity.

High-yield bonds in China’s real estate sector have suffered their worst year on record. On average, they have lost more than a third of their value. Meanwhile, the largest, most distressed companies like Evergrande, Kaisa, and Fantasia have experienced an 80 percent decline. According to JPMorgan, as of October, there had already been 11 defaults this year.

Land sales are down more than 55 percent year-on-year, and housing sales have decreased by 25 percent. In order to contain the fallout, JP Morgan suggests that regulators will need to stabilize physical demand and financial markets. JP Morgan also warns that unless regulators take action, bonds—even from higher quality companies—may begin trading at lower prices. This could make it difficult for all companies, regardless of credit rating, to obtain financing. A lack of ready financing could prove a drag across the entire economy.

The managing director of China Beige Book International, Shehzad Qazi, predicted that the real state sector would be stressed for the near- or medium-term future, but a collapse was very unlikely. Qazi went on to say that Beijing is taking steps to safeguard the rest of the property sector from an Evergrande collapse. Head of research for the Asia-Pacific CBRE, Henry Chin, similarly expressed his expectation that the CCP would ensure a “controlled landing.”

Among the steps that Beijing is taking to prevent the sector from collapsing is supporting bond issues by property developers, to fund mergers and acquisitions of distressed firms. Additionally, less indebted firms are being encouraged to pay off maturing offshore debt by issuing corporate bonds. And finally, the CCP is working to increase the demand for houses. Mortgage lending in October increased by more than 34 percent, compared to September, reaching $31 billion.

In short, the CCP’s solution to China’s debt problem is to create more debt. To avoid default on distressed bonds, it recommends issuing new bonds and using the proceeds from the new bonds to pay off the old bonds.

Vice Premier Liu He said the way to solve the housing crisis and develop a healthy real estate sector would be for regulators to “focus on stabilizing land prices, house prices, and stabilize expectations.” In other words, the premier is advocating increased government control of the market, protecting the real estate sector from the basic rules of supply and demand. Furthermore, “stabilizing expectations” suggests that in addition to controlling the market, the CCP aims to control how people think about the market.

In a market economy, investors face the risk associated with the particular company or industry they invest in. They are also confronted with systemic risk, which is inherent in the greater economy. In the case of Evergrande and China, it is almost impossible to predict the risk because there is no way of anticipating what the regulators will do. The success or failure of any investment at this point, inside or outside of the real estate sector, is largely dependent on decisions taken by the CCP.

This underscores, once again, that China is not capitalist and that socialism with market characteristics means the CCP, not market forces, controls the economy and civil society.