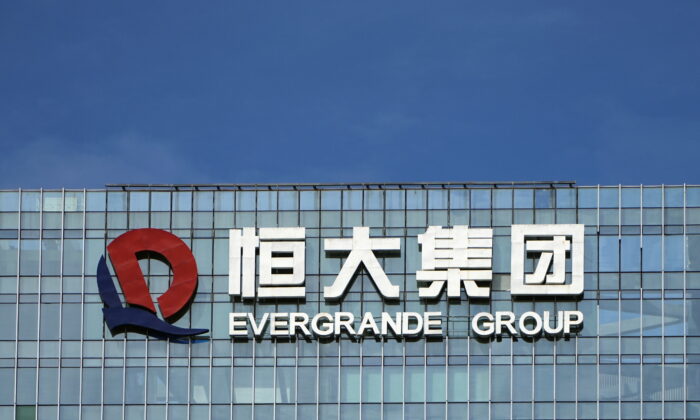 The company logo is seen on the headquarters of China Evergrande Group in Shenzhen, Guangdong Province, China, on Sept. 26, 2021. (Aly Song/Reuters)
Economy

HONG KONG—Shares of Chinese Estates Holdings, a former major shareholder of embattled developer China Evergrande, jumped as much as 32 percent on Thursday after it announced an offer to be taken private for $245 million.

The Hong Kong developer said on Wednesday the family of Chinese Estates’ biggest shareholder, Joseph Lau, had proposed to take it private by offering minority shareholders a 38 percent premium to its last traded price.

The offer represents the latest move by Lau and China Estates to emerge from the shadow of Evergrande, which is floundering due to a huge debt load and threatening the Hong Kong company’s future.

Formerly Evergrande’s second-biggest shareholder, Chinese Estates has already slashed its holding over the past few months to 4.39 percent from 6.48 percent. It has flagged a goal to exit the holding completely, and estimates a loss of $1.33 billion for the current year from the stake disposal.

Eugene Law, business development director of China Galaxy International Financial, said that as a listed company, Chinese Estates would need to keep updating its position in Evergrande and “it does not want that trouble.”

Once China’s top-selling property group, Evergrande is facing one of the country’s largest-ever defaults as it struggles with more than $300 billion of debt. Its fate is also unsettling global markets wary about the fallout if one of China’s biggest borrowers topples.

Chinese Estates’ shares rose to $0.49 by noon. They resumed trading on Thursday after being suspended on Sept. 29.

Shares of the Hong Kong developer were down 42 percent this year before the trading suspension, dragged down by unrealized losses in its investment in Evergrande, whose stock took a hit due to liquidity crises and default risks.

In a statement late on Wednesday, Chinese Estates said its stock price may be further affected by Evergrande, as it is “cautious and concerned” about recent developments of the Chinese developer.

A delisting would reduce the costs and management resources to maintain the listing status, Chinese Estates added, and it could provide more flexibility to implement long-term business strategies.

Other than Evergrande, Chinese Estates said it has significant investments in another Chinese developer, Kaisa Group, whose shares have also suffered falls over the past few months on wider liquidity concerns about China’s real estate sector.

Chinese Estates’ former chairman Lau has been a major backer of Evergrande chairman Hui Ka Yan and is a member of the so-called “poker club” of Hong Kong tycoons that includes Hui.

Lau, whose family owns about 75 percent of Chinese Estates’ equity capital, resigned as its chairman and chief executive in 2014 after he was found guilty of bribery and money laundering charges in the gambling hub of Macau.

By Clare Jim and Donny Kwok