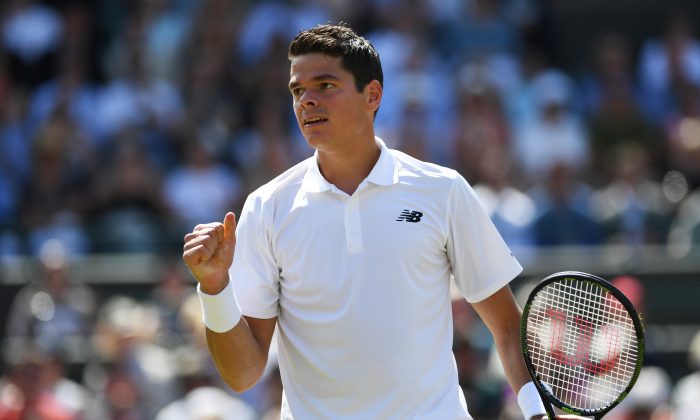 Milos Raonic has always tirelessly worked on improving every aspect of his game. From using a mouth-guard to better align his spine, to hooking up with John McEnroe at the start of the grass-court season, the Canadian superstar reached his second Wimbledon semifinal on Wednesday, July 6.

In his quarterfinal match, Raonic downed Sam Querrey, the man who had cleared the path to the semis by taking out the game’s best player Novak Djokovic in the third round.

Milos called his latest victory a “well deserved win” and said it’s exciting and humbling at the same time to reach his second Wimbledon semifinal.

The Canadian was flawless except for a hiccup at the end of the third set. “Best match I’ve played all the way through, other than a span of three games,” Raonic said in his postgame press conference. Peter Fleming, tennis commentator and former doubles partner of McEnroe said early in the third set, “This is the best tennis I’ve seen Milos Raonic play.”

Raonic hit 58 winners, committed only 16 unforced errors, and faced only two break points. He won 74 percent of points at the net and 71 percent of his second serve points.

Raonic sowed the seeds of his Wimbledon run at the Queen’s Club warmup in late June. He started his run to the final with a come-from-behind win over Australian bad boy Nick Kyrgios. Raonic had lost his last three matches—including Wimbledon 2015—against the rising star so that was a hoodoo exorcism of sorts.

In the final, Raonic was up a set and a break against world No. 2 Andy Murray before capitulating. It would have been Milos’ biggest scalp in a final. He defeated Roger Federer earlier this year in Brisbane, which showed he can beat the game’s elite when the stakes are highest.

Milos appears to be showing more emotion on court and a greater desire to come to the net. He’s a very capable volleyer and against Querrey, and he showed how effective his backhand slice approach can be.

McEnroe’s influence is helping Raonic’s variety in attack. After his win over Querrey, Milos said McEnroe has also helped him change his demeanor on the court, being more positive when at times he would seem to check out emotionally.

And McEnroe, a terrific practitioner of serve and volley tennis has helped Raonic’s net play.

Raonic took another big step in his promising tennis career by winning his first five-set match after losing the first two sets in the fourth round. Pulling off this type of comeback is a rite of passage for men’s tennis players—all the game’s top dogs have done it.

Winning three straight sets with no margin for error, after losing the first two requires mental strength to not go through the typical momentum shifts of a long match. Raonic said he has always had the physical ability to do it, but earlier in his career, he would not have had the perspective of what he needed to do in those moments.

Hard Work, Desire to Reach the Top Paying Off for Milos Raonic at Australian Open

Previously, Raonic was 0–8 in grand slams after losing the first two sets and his opponent David Goffin had won his last five five-setters. Goffin, ranked and seeded 11th, is clearly no slouch.

“This guy’s going to scrap his way back,” Raonic said in an interview with TSN on what message his comeback sends other players.

Raonic entered that fourth round match playing very consistent, high level tennis. He didn’t lose his serve in his first three matches and won all four tiebreaks he played. Raonic is at his best in tiebreaks with a tour-leading 20–5 record in 2016.

“He’s improving every day that goes by,” said Federer about Raonic after his own comeback from two sets down against Marin Cilic to reach the semis against Milos.

“I have very clear objectives for myself beyond this tournament. To achieve those things, you have to face off against the best players at the best tournaments,” Raonic said.

He also said his objective from the start was to win Wimbledon and McEnroe was on-board with that.