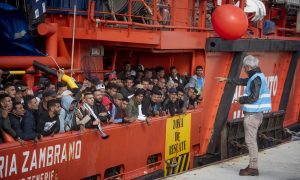 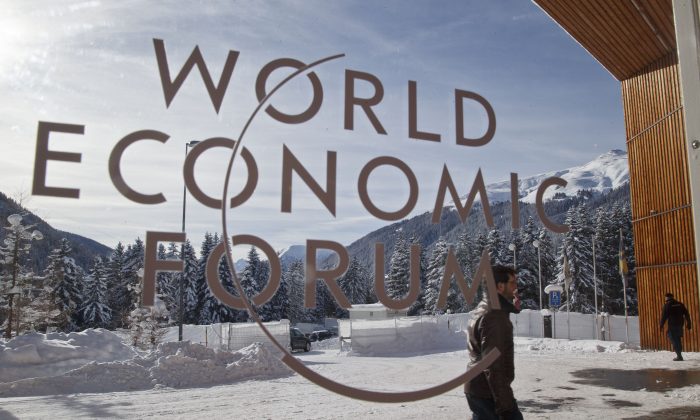 The main entrance of the congress center where the World Economic Forum will take place later this week in Davos, Switzerland. (AP Photo/Michel Euler)
Europe

DAVOS, Switzerland—People around the world place much more trust in their companies than their political leaders, according to a major survey that suggests a mood of uncertainty and pessimism on the eve of the World Economic Forum in Davos.

The annual Edelman Trust Barometer shows only one in five people believe the economic, political, and social system is working for them, while nearly 60 percent think trade conflicts are hurting their companies and putting their jobs at risk.

The sense of gloom is strongest in developed markets led by Japan, where 84 percent of the general public—excluding the “informed public” who are college-educated, earn above-average incomes and consume news regularly—do not believe they will be better off in five years’ time, followed by France at 79 percent, Germany at 74 percent, and Britain at 72 percent. That is far above the average 49 percent of the 27 countries examined in the research.

Amid low confidence that politicians will fix the problems, these people are turning to companies, with 75 percent saying they trust “my employer,” compared to 48 percent for government and 47 percent for the media.

“CEOs now have to be visible, show personal commitment, absolutely step into the void, because we’ve got a leadership void in the world,” Richard Edelman, head of the communications marketing firm that commissioned the research, told Reuters.

Optimism was higher in the United States, where nearly half of the general public believed they would be better off in the next five years. The corresponding figure there was 62 percent for the better-educated, higher-earning “informed public.”

The survey, based on the opinions of over 33,000 people and conducted between Oct. 19 and Nov. 16, is published on the eve of the Davos gathering in the Swiss Alps, which this year brings together some 3,000 business and world leaders amid anxiety over the U.S.-China trade war, Brexit and a slowdown in global growth.

The pessimism in Japan, France, Germany, and Britain reflects a variety of factors.

“I think Japan’s never really recovered from Fukushima, there was such a violation of trust when that happened,” said Edelman, referring to the authorities’ botched response to a massive nuclear accident in 2011.

Signs of slowing global demand and a sharp rise in the yen have clouded the outlook for Japan’s export-reliant economy, and the government plans tax hikes to pay for ballooning health care costs for its rapidly ageing population.

“The problem for the three (European) countries…. is that given the reality of the potentially diminished economic future, there is deep anger in advance,” Edelman said.

In France, what started as a grassroots rebellion by low-paid workers to protest taxes on diesel fuel and a squeeze on household incomes has morphed into an assault on President Emmanuel Macron and his reforms, seen by the protesters as favoring the wealthy.

And in Britain, the Brexit crisis intensified last week after Prime Minister Theresa May’s two-year attempt to forge an amicable divorce from the European Union was crushed by parliament in the biggest defeat for a British leader in modern history.

The survey found that while only 49 percent of the wider population trusted institutions such as governments, this figure rose to 65 percent among high-income, college-educated and well-informed people—the biggest gap since the research began 19 years ago.

Despite widespread distrust of the media, uncertainty about the future has led to a sharp jump in people’s consumption and sharing of news and information, up 22 percentage points in a year to 72 percent.

But more than 70 percent said they worry about false information or fake news being used as a weapon.