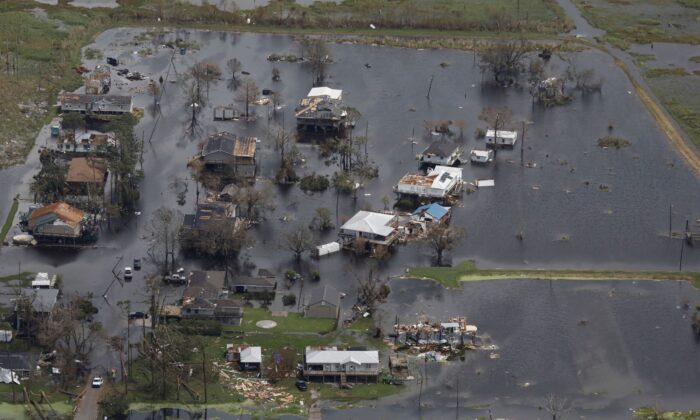 An aerial view shows destroyed houses in a flooded area after Hurricane Ida made landfall in Louisiana, in Montegut, La., on Aug. 31, 2021. (Marco Bello/File/Reuters)
Regional News

Evacuees Urged Not to Return Home After Devastation From Storm Ida

NEW ORLEANS—Evacuees who fled Ida before the storm hammered southern Louisiana are being urged not to return home just yet as the long, arduous recovery is only beginning from one of the most powerful storms ever to hit the U.S. Gulf Coast.

Three days after the Category 4 hurricane came ashore, more than a million homes and businesses remained without electricity on Wednesday, and power utility Entergy Corp warned it may take weeks to restore service in some areas where transmission towers lay in crumpled heaps of metal.

The storm killed at least four people and will leave many thousands more in misery as countless homes were destroyed and towns were flooded, evoking memories of Hurricane Katrina, which killed some 1,800 and nearly destroyed New Orleans 16 years ago.

In one sign of desperation, cars lined up for nearly a mile to get drinking water from volunteers at Lockport, Louisiana, on Tuesday.

Lockport is near one of the hardest-hit towns, Houma, population 33,000 and about 50 miles (80 km) southwest of New Orleans.

The storm ripped off roofs and felled power lines as it hovered over the area for hours, maintaining much of its strength.

Officials of Terrebonne Parish, which includes Houma, issued a statement imploring people not to return, saying there was no electricity, water service was unreliable, emergency shelters were damaged, and none of the hospitals were operating.

“Evacuees: DO NOT, DO NOT, DO NOT come back to Terrebonne Parish if you evacuated,” officials said in an advisory posted on Twitter by a reporter for WWL television.

“There is NO medical care because there are no operating hospitals in Terrebonne Parish right now,” the notice said, adding that previously admitted patients were being moved.

Houma residents Scott and Daria Hebert told WAFB television they regretted not evacuating ahead of time and were attempting to flee on Tuesday.

“It was just so tenacious. It just stayed, probably seven or eight hours of just hammering us,” Scott Hebert said.

“This was our Katrina, basically,” Daria Hebert added.

Compounding the suffering, parts of Louisiana and Mississippi were under heat advisories, with a heat index in much of the area reaching 95 degrees Fahrenheit (35 degrees Celsius) on Tuesday, the National Weather Service said.

Even the power generators were hazardous. Nine people in St. Tammany Parish northeast of New Orleans were taken to hospital overnight for carbon monoxide poisoning from a gas-fueled generator, local media reported.

Power officials have told leaders in Jefferson Parish south of New Orleans that its roughly 440,000 people may have to manage without electricity for a month or longer after utility poles toppled across the county, councilman Deano Bonano said.

“The damage from this is far worse than Katrina from a wind standpoint,” said Bonano.

Among the four deaths were two people killed in the collapse of a southeastern Mississippi highway that critically injured 10 others. One man died attempting to drive through high water in New Orleans and another when a tree fell on a Baton Rouge home.