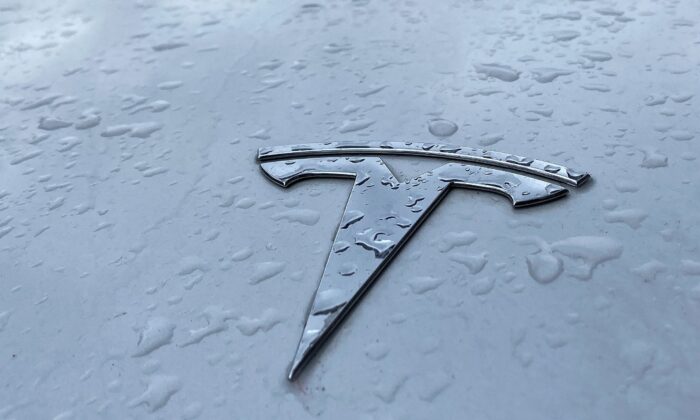 Raindrops are seen next to the Tesla logo on the bonnet of a Tesla electric car in Berlin's Kreuzberg district on March 15, 2021. (David Gannon/AFP via Getty Images)
Markets

Most electric vehicle (EV) stocks advanced in the week ending Nov. 5 amid sector wide optimism. EV market leader Tesla Inc. started the week on a tentative note but picked up momentum over the course of the week.

Here are the key events that happened in the EV space during the week:

After riding on the back of the Hertz Global Holdings Inc. deal optimism, Tesla shares came down from stratospheric levels this week. It was Tesla CEO Elon Musk who brought the stock down with his comments early in the week by suggesting Hertz is not a finalized a deal yet.

Later, a Wall Street Journal report said the two parties are engaged in talks regarding the timing of the delivery of bulk orders.

In other Tesla-related news, Cathie Wood’s Ark Invest continued to trim its stake, offloading about $148 million in Tesla shares during the week.

Tesla also suffered negative press after it had to recall 11,700 vehicles due to a software communication error that may potentially lead to rear-end collisions.

As Tesla shares went through the roof this week, talks about a potential stock split began doing the rounds. Loup Funds co-founder Gene Munster said in an exclusive comment to Benzinga that a stock split could be forthcoming next year.

Nio Inc., which warned last weekend of the potential impact of a manufacturing line upgrade, reported a 27.5 percent year-over-year decline and a 65.5 percent month-over-month plunge in vehicle sales for October. Surprisingly, the stock advanced on the day of the release of October deliveries, as Nio executives talked up the stock. Abounding order flow signaled by the company also helped mitigate negativity.

Lucid Group Inc. (LCID), which handed over deliveries of its first Lucid Air Dream Edition cars to its customers last weekend, announced its newest retail location—the Lucid Studio at Tysons Corner Center in the Washington metro area. The new Studio will open its doors to the public on Saturday.

Pre-revenue EV maker Fisker Inc. reported a third-quarter loss that was wider than expected. The stock, however, reacted positively as the company confirmed the Nov. 2022 production start time of its Ocean SUV.

Ford Motor Company said in its monthly deliveries release that reservations for its F-150 Lightning pickup truck have crossed 160,000.

Despite reporting a 4 percent drop in October sales, Ford’s EV transition appears to be on track. The company said the E-Transit van has been sold out and the Mustang Mach-E was the second most sold electric SUV, with sales jumping 76.9 percent in October.

“In the new automotive world, we are faced with competition the likes of which Volkswagen has never seen before,” Diess reportedly said in a speech at the carmaker’s flagship plant in Wolfsburg.

EV Stock Performances for the Week