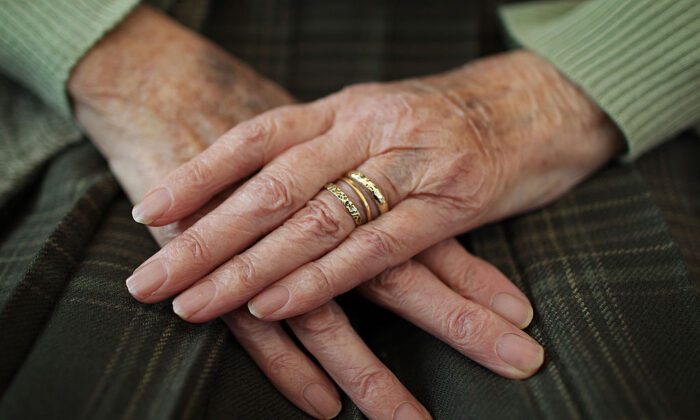 An elderly woman sits at home with her hands on her lap in Surrey, England, on Feb. 17, 2010. (Peter Macdiarmid/Getty Images)
Viewpoints

Supporters of voluntary assisted dying (VAD) are keen to push New South Wales (NSW) across the final frontier of euthanasia legalisation as quickly as possible.

Currently, NSW is the only jurisdiction in Australia that has not yet passed a law granting the so-called “right to die,” but hopes that the VAD bill promoted by Independent MP Alex Greenwich would quickly turn into law have stalled.

Earlier this week, the bill presented by Greenwich was referred to an upper house committee. Even though the bill is still likely to be debated in the lower house soon—if the government allocates the time to do so—nothing much more can happen until the upper house committee reports back in early February next year.

Voluntary assisted dying is, in effect, “physician-assisted suicide,” but proponents dislike the use of the word “suicide.”

A VAD law makes it lawful for someone, such as a physician, to assist another person to commit suicide. In NSW and the territories, where voluntary assisted dying remains illegal, assisting suicide can attract serious criminal charges.

VAD laws are already operating in Victoria—the first state to legalise euthanasia—and Western Australia. It will become available next year in Tasmania and South Australia, and on Jan. 1, 2023 in Queensland.

The laws were passed comfortably in each of those state parliaments after long and emotional campaigns that focused on suffering.

Now NSW is the “hold out” state.

Advocates of VAD remember how a previous attempt at legalisation in 2017 failed by one vote. This time, Greenwich and his supporters hope that by evoking the spectre of unendurable suffering and torment at the end of life, the parliament of the nation’s oldest state will relent.

And they are hopeful of success, arguing that VAD is popular with voters in NSW. According to 2019 Vote Compass data, 77 percent of people surveyed agreed that terminally ill patients should be able to end their own lives with medical assistance—regardless, apparently, of whether or not such a patient was actually in untreatable pain.

Nor did survey respondents appear to have been asked whether the better provision of palliative care services capable of alleviating such pain would have altered their views about euthanasia.

Yet in his second reading speech, Greenwich cited evidence that between 4 to 20 percent of terminally ill patients are beyond the help of palliative care.

Advocates of VAD like to present it as something like the “medical treatment of last resort” used only when every other option has been exhausted.

One element of their strategy is to argue that only a very small number of patients would ever avail themselves of this “treatment” and that the circumstances would have to be quite exceptional.

Another element is to play on fear and to emphasise what Greenwich refers to as “people’s cruel pain.”

Gruesome accounts of suffering when a patient has apparently reached the point of untreatable pain are presented in such a way as to suggest that only a most inhumane and callous person could possibly be opposed to euthanasia.

But while it is certainly true that death marks the end of every form of human experience, making it lawful for doctors to kill patients can hardly be considered an acceptable or humane form of pain palliation for a person—no matter how many “safeguards” against abuse are purportedly built in to a VAD scheme.

If the proposed legislation really does aim to provide only for a very small number of people facing exceptional circumstance, NSW legislators ought surely to devote less time to making it lawful for doctors to kill, and much more time to securing adequate standards of palliative care throughout the state for all residents.

VAD legislation purports to address the problem of “unendurable pain” caused by terminal illness. However, one of the dangers such laws present—and one vigorously denied by VAD advocates—is that the measure of “unendurable pain” is, in the end, totally subjective. Furthermore, once it includes physical pain, there is no reason it can’t eventually include mental pain.

In other words, the categories of eligibility can, and almost certainly will, expand to embrace more than what the legislation was originally intended to assist.

This has already occurred in Belgium which legalised euthanasia in 2002. However, in 2014, the Belgian Parliament extended the VAD scheme to include terminally ill children of any age.

Starting with Victoria in 2017, Australia has only recently started to legalise euthanasia. Now it is doing so steadily, state by state.

Proponents of VAD insist that safeguards are cast in iron. However, we will discover soon enough what countries such as Belgium already know: once the final frontier of physician-assisted suicide has been crossed, there is no going back.