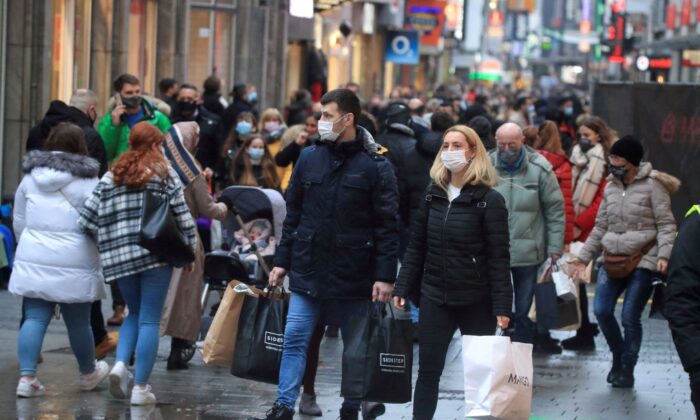 LONDON—The eurozone economic recovery regained momentum this month as an easing of COVID-19 restrictions gave a boost to the bloc’s dominant service industry, a survey showed, but consumers faced prices rising at a record rate.

As the Omicron COVID-19 variant swept across Europe some governments reimposed measures to contain its spread.

IHS Markit’s Flash Composite Purchasing Managers’ Index, seen as guide to overall economic health, jumped to a five-month high of 55.8 in February from 52.3 in January, significantly above the median 52.7 forecast in a Reuters poll.

“The surge in the euro zone flash Composite PMI for February suggests activity is recovering well from the pandemic-related weakness over the winter,” said Andrew Kenningham at Capital Economics.

“Having regained its pre-pandemic level in Q4 2021, the euro zone economy is likely to expand at a reasonable pace in the first quarter of this year and should accelerate in the next two quarters as tourism, travel, and hospitality get back to normal.”

A flash PMI for the service industry soared to 55.8 from 51.1, a five-month high and above all forecasts in a Reuters poll that had predicted only a modest rise to 52.0. Anything above 50 indicates growth.

Improving demand for services pushed business activity across Germany’s private sector to a six-month high, while in France growth was stronger than expected, helped by an improvement in the COVID-19 situation.

In Britain, outside the common currency bloc and the European Union, the private sector picked up at the fastest pace since June 2021, as spending on travel, leisure, and entertainment rose after an easing of COVID-19 cases.

Factories had another solid month and the flash eurozone manufacturing PMI only dipped from January’s 58.7—where the Reuters poll predicted it would hold—coming in at 58.4. An index measuring output, which feeds into the composite PMI nudged up to 55.6 from 55.4.

Activity could have been faster but lingering supply chain bottlenecks and booming demand meant factories were unable to keep up, and the backlogs of work index rose to 58.7 from 56.9.

With the economy reopening, and amid hopes the worst of the pandemic is over, optimism improved across the board. The services business expectations index climbed to 68.7 from 67.2.

“The forward-looking indicators were also encouraging as year-ahead sentiment rose in February to its strongest since June 2021,” said Ricardo Amaro at Oxford Economics.

“The weak start to the year means eurozone GDP growth is likely to remain modest in Q1, but today’s PMI results chime with our forecast that solid growth will resume in Q2.”

The economic rebound came despite overall prices charged by firms rising at the fastest rate since IHS Markit began collecting the data in late 2002. The composite output prices index climbed to 62.7 from 61.9.

Inflation in the eurozone hit a record high in January and the European Central Bank is under growing pressure to tighten monetary policy. A Reuters poll last week suggested the Bank would raise its deposit rate in the second half of this year, and not wait until 2023 as previously expected. [ECILT/EU]

“The PMI suggests the winter economic dip could be much milder than expected, labor market pressures continue to build and second-round effects are resulting in more broad-based price pressures at the moment,” said Bert Colijn at ING.

“Expect this to add to hawkish pressures ahead of the European Central Bank March meeting.”