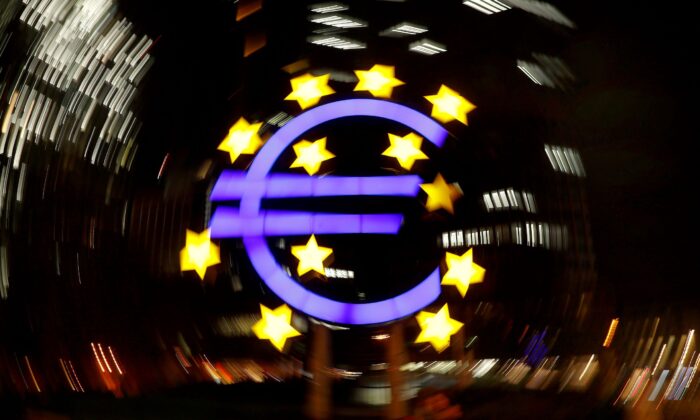 The euro sign is photographed in front of the former headquarters of the European Central Bank in Frankfurt, Germany, on April 9, 2019. (Kai Pfaffenbach/Reuters)
Inflation

Consumer price inflation across the 19 countries that use the euro currency accelerated in the year through November at its fastest pace since records began in 1997, according to official data, which also showed inflation broadening out into non-energy categories.

The European Union’s statistics agency Eurostat said in a Nov. 30 release (pdf) that the eurozone’s consumer price index (CPI), which measures inflation from the perspective of end consumers of goods and services, rose 4.9 percent in the 12 months through November, an all-time high. Consensus forecasts cited by FXStreet expected a far lower rate of inflation of 3.7 percent.

Surging energy costs were behind most of the rise in the headline inflation measure, with energy inflation shooting up 27.4 percent over the year.

In a sign that it’s not just high energy costs driving up prices in the eurozone, a separate measure called core CPI, which excludes the volatile categories of food and energy, rose 2.6 percent in the year through November, compared to a 1.9 percent forecast.

“A big jump in services inflation from 2.1 to 2.7 percent and a more modest non-energy industrial goods inflation increase from 2 to 2.4 percent suggest a broadening of inflation categories above 2 percent,” ING analysts wrote in a note.

While ING analysts expect eurozone inflationary pressures to ease next year in line with anticipated declines in energy costs and as supply chain bottlenecks get ironed out, they predict that supply-side factors in goods production will be the dominant factor going forward.

“The big question mark is around rising goods prices. Pipeline cost pressures are not yet abating, causing us to expect increased goods inflation for most of 2022 which will take over as the dominant driver of headline inflation when energy inflation weakens,” they wrote.

The recently discovered Omicron variant of the CCP (Chinese Communist Party) virus has also prompted some uncertainty over the economic outlook in the eurozone—and globally—with expectations building for central banks to hold back from announcing any big policy changes soon.

Still, ING analysts expect the European Central Bank (ECB) to announce an end to its pandemic emergency purchase program in March 2022, while noting rising market expectations for the ECB’s first post-pandemic interest rate hike to move closer to the beginning of 2023.