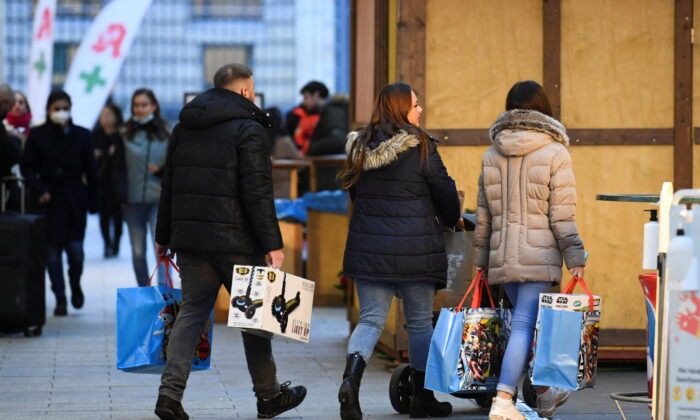 People with shopping bags walk near a shopping center, amid the COVID-19 pandemic, in Berlin, on Dec. 21, 2021. (Annegret Hilse/Reuters)
Economy

FRANKFURT, Germany—Consumers in the eurozone are bracing for the economy to shrink and for high inflation to continue eating into their income in the next year, a European Central Bank survey showed on Thursday.

The Consumer Expectations Survey, used by policymakers for input in their deliberations and published on Thursday for the first time, showed households were beginning to lose faith in the ECB’s ability to bring inflation back down to its 2 percent goal.

The poll, carried out in June, showed the median consumer expected prices to grow by 5 percent over the following year and saw inflation at 2.8 percent in three years’ time.

This compares to expectations for nominal income to grow by 0.9 percent and spending by 3.9 percent, implying a large dent in households’ ability to save.

Consumers also expected the economy to contract by 1.3 percent in the coming 12 months.

The ECB raised interest rate by 50 basis points last month and guided for more hikes in the months ahead to fight record-high eurozone inflation, which hit 8.9 percent last month.

It cited “anchoring … inflation expectations” as one of the reasons for the move.

For the survey, the ECB interviews around 14,000 adults each month from Belgium, Germany, Spain, France, Italy, and the Netherlands. These countries represent 85 percent of the euro area’s GDP and 83.8 percent of its population.