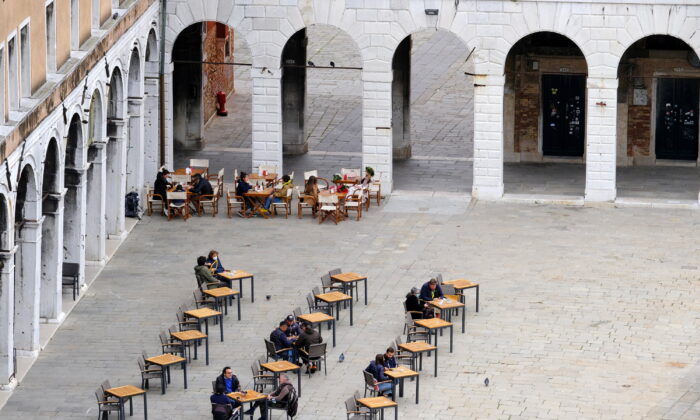 LONDON—Business activity in the eurozone contracted slightly in July for the first time since early last year as consumers reined in spending amid a cost-of-living crisis, according to a survey which suggested the outlook for the economy was gloomy.

S&P Global’s final composite Purchasing Managers’ Index (PMI), seen as a good gauge of economic health, fell to a 17-month low of 49.9 in July from June’s 52.0, albeit ahead of a preliminary 49.4 estimate. Anything below 50 indicates contraction.

“The euro zone economic outlook has darkened at the start of the third quarter, with the latest survey data signalling a contraction of GDP in July,” said Chris Williamson, chief business economist at S&P Global.

“Soaring inflation, rising interest rates, and supply worries—notably for energy—have led to the biggest drops in output and demand seen for a almost a decade, barring pandemic lockdown months.”

Although price increases moderated they remained steep, and the new business index fell to 47.6 from 50.0, its lowest since November 2020.

A PMI covering the bloc’s dominant services industry fell to 51.2 from 53.0, although that was ahead of the 50.6 flash estimate. The reading comes after a sister survey on Monday showed factory activity in the bloc contracted in July.

Demand for services fell as customers stayed home and firms were less optimistic. The business expectations index dropped to 56.8 from 58.5, its lowest since October 2020 when the region was in the depths of the coronavirus pandemic.

“A much hoped-for surge in consumer spending after the easing of pandemic restrictions is being thwarted as households grow increasingly concerned about the rising cost of living, meaning discretionary spending is being diverted to essentials,” Williamson said.

“At the same time, business spending is being subdued by increased caution and risk aversion amid the gloomier economic outlook.”