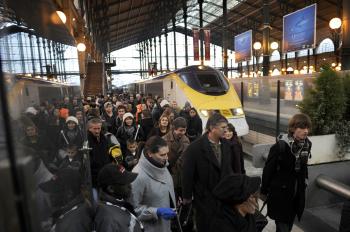 Travelers walk on a platform at Paris Gare du Nord northbound railway station on Dec. 22, 2009, in Paris, after leaving the week's first Eurostar train from London as the company resumed a limited service after a three-day shutdown caused by breakdowns in (Fred Dufour/AFP/Getty Images)
Europe

Epoch Times Staff
View profile
Follow
biggersmaller
Print
PARIS—Following a Dec. 19 incident involving the Paris-London train line Eurostar, French and British authorities have launched an investigation to determine why more than 2,500 travelers were stranded for 16 hours in the undersea channel between France and the U.K. before being rescued.

Angry passengers described the night as pure “chaos,” saying they received no information, water, or food while they were trapped under the English Channel without any air conditioning. The circumstances surrounding why five Eurostar trains broke down in the channel during the time remains a mystery for Eurchannel, the company operating the cross-sea rail.

Summoned by French President Nicolas Sarkozy on Dec. 21 to explain this "inconceivable way to treat passengers and leave them without any information," Guillaume Pépy, CEO of SNCF, the French national railway company, had few answers for the president and the public.

Technical experts from Eurostar later explained that Eurostar trains had accumulated up to 30 cm (11 inches) of snow that—once melted by the heat of the tunnel—damaged crucial electronic components, leading to engine failures.

Victims of the "Eurostar horror night" will be reimbursed twice the price of their fares, in addition to hotel and taxi costs, and will receive a compensation of 170 Euros (US$250). An investigation has been ordered by Dominique Bussereau, the French state secretary of Transportation. This follows the request of European MP Dominique Baudis, former mayor of Toulouse, who was in one of the blocked trains with his family.

Many indeed question both the quality of information given to passengers and the length of time needed for rescuing them out of the channel.

"None of the catastrophe scenarios to which we train our teams anticipates such a succession of problems," said Pascal Sainson, chief operating officer of Eurotunnel, the company operating the France-U.K. tunnel.

Eurostar deflected responsibility to Eurotunnel, accusing the company of not having provided sufficient information. Eurotunnel, however, answered that train operators were informed on a timely basis and that Eurostar was to assume responsibility if such information were not communicated to passengers.

With no information, some worried or exhausted passengers had taken the lead of leaving the train without having been informed to do so by security personnel, taking their luggage along with them, and adding further difficulty to the evacuation.

On Dec. 22 Eurostar was only partially restored after three days of being completely shutdown due to the incident. The company does not expect to be fully operational for the Christmas holiday period.

In Gare du Nord station in Paris, angry travelers again complained about the lack of information provided by Eurostar. They were redirected to airports or ferry terminals by SNCF support teams, the only available ways to reach the U.K. from France outside of rail.