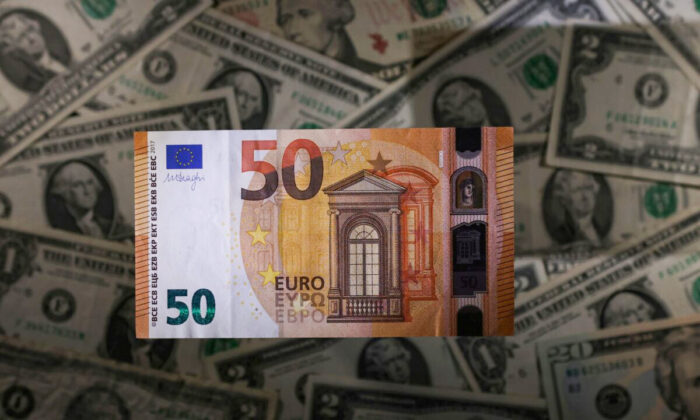 LONDON—The euro’s losses deepened on Tuesday after data showing eurozone inflation hit a record high in May, but expectations the European Central Bank will soon hike rates kept the single currency on track for its best monthly performance in a year.

Rising inflation is usually considered a precursor to tighter monetary policy. The ECB is wary that interest rate hikes might tip the economy into a recession, however, especially as the European Union’s plans to cut its reliance on Russian energy could push inflation even higher.

“The dollar has also advanced today on back of higher oil prices and that is proving to be a bigger factor, and the risk of a recession is seen as greater in Europe than in the U.S.,” said Stuart Cole, chief macro strategist at Equiti Capital.

Inflation in the 19 countries sharing the euro accelerated to 8.1 percent in May from 7.4 percent in April, beating expectations for 7.7 percent as price growth continued to broaden, indicating that it is no longer just energy pulling up the headline figure.

Against the dollar, the euro extended its drop to fall 0.6 percent to $1.0777 before trimming some losses. On a monthly basis, the single currency was up nearly 2 percent, its best monthly gain in a year.

Markets have steadily ratcheted higher their expectations of ECB rate hikes. Investors now expect borrowing costs to rise as much as 115 bps this year, compared to 110 bps last week.

“A substantial upward revision to the ECB’s near-term inflation trajectory is likely when the ECB’s next round of staff forecasts are published in June,” said Adam Cole, chief currency strategist at RBC Capital Markets.

The euro’s losses propped up the dollar, which also benefited from a surge in U.S. Treasury yields.

News that European Union leaders agreed in principle on Monday to cut most oil imports from Russia by the end of this year sent oil prices higher and boosted commodity currencies.

The Canadian dollar touched 1.2653 per dollar, near a one-month high struck overnight, ahead of Wednesday’s Bank of Canada meeting at which all 30 economists polled by Reuters expect a 50-basis-point rate hike to 1.50 percent.

Bitcoin was on the front foot at around $31,600 having risen above $32,000 overnight for the first time in more than three weeks.