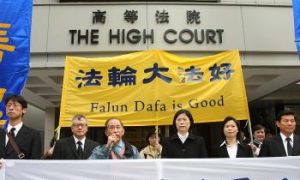 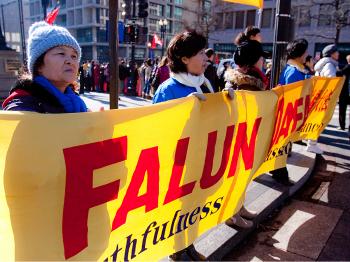 WASHINGTON—A human rights lawyer who defended Falun Gong practitioners in China has emerged as one of the most prominent reminders of Chinese repression during Chinese Communist Party Chairman Hu Jintao’s state visit to Washington this week.

When Secretary of State Hillary Clinton elucidated U.S. concerns about human rights in China last Friday, she named Gao Zhisheng, and when 32 members of Congress sent a cosigned letter to Obama, and 12 human rights organizations sent their letters, Gao’s name was prominent.

Rallying outside the White House and at the State Department on Jan. 19, hundreds of people from China democracy groups, Taiwan democracy organizations, and members of the spiritual practice Falun Gong, which is banned in China, all called attention to the Christian human rights lawyer. He has managed to get his story out eloquently to the international community, despite torture sessions and forced disappearances since 2006.

Falun Gong practitioner Charles Lee traveled from New York to Washington on Wednesday to deliver a message from the European Parliament calling on President Obama to raise Gao’s case with Chinese authorities.

Lee survived illegal detention and was rescued to the United States in 2006 with support from the international community. The medical doctor, who is also an American citizen, spent three years in a Chinese prison, where he endured mental torture, including sleep deprivation, monitors who prevented him from practicing Falun Gong exercises, and relentless attempts at brainwashing. Prison agents spared nothing in attempting to force him into renounce his commitment to Falun Gong’s teaching of truthfulness, compassion and forbearance.

European Parliament vice president for democracy and human rights, Edward McMillan-Scott, issued a press release calling on President Obama to raise Gao’s case to Hu and demand the lawyer’s immediate release. European Parliament President Jerzy Buzek also called on the Chinese government to reveal Gao’s whereabouts and well-being, at the opening of a plenary in Strasbourg.

“Europe will not forget about Gao, and we must show a united front with America to secure his release. I urge President Obama to give a clear and consistent message to [President] Hu Jintao at their meeting in Washington,” stated McMillan-Scott.

The Eurozone action was prompted by the recent release by Gao’s wife, Geng He, of Speaking from My Heart, a previously unreleased prologue to Dark Night, Dark Hood, and Kidnapping by Dark Mafia, which is Gao’s account of 50 harrowing days of torture he endured at the hands of Chinese security agents from September-November in 2007.

That torture included furious beatings, electric shocks to his genitals, and burning cigarettes held close to his eyes for hours. He wrote that some of the torture he would never describe.

In Speaking from My Heart, Gao acknowledged his “friends outside the country who truly care about human rights in China,” and he thanked McMillan-Scott and the “ladies and gentlemen of the European Union” for their “selfless moral support, and our hope in fighting for freedom and human rights.”