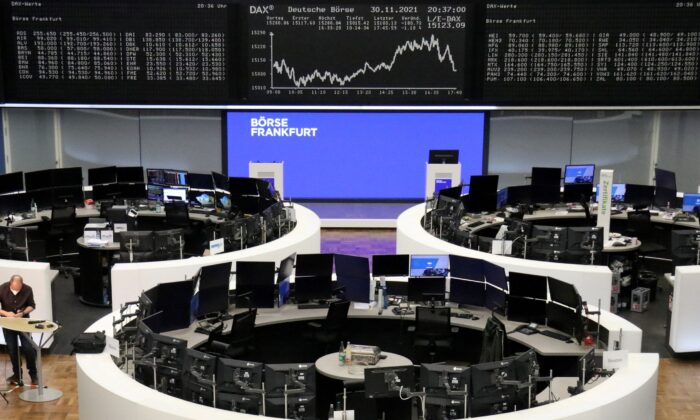 The German share price index DAX graph is pictured at the stock exchange in Frankfurt, Germany, on Nov. 30, 2021. (Staff/Reuters)
Markets

LONDON/MILAN—Uncertainty about the COVID-19 pandemic has not dented prospects for European stocks to hit record highs in 2022, boosted by a recovery in corporate profits, according to a Reuters poll of 23 fund managers, strategists, and brokers.

The poll, conducted over the past two weeks, predicted Germany’s DAX and France’s CAC 40 blue chip indexes would hit uncharted highs by mid-2022, rising about 8 percent and 6 percent from Monday’s close respectively.

Although European stocks tumbled 3.7 percent on Friday when fears about the impact of the new coronavirus variant triggered a broad sell-off, they are still up about 17 percent since the start of the year.

A robust bounce back in profits from the lockdown-triggered recession of 2020 lies behind this year’s strong performance.

According to the latest Refinitiv I/B/E/S data, the third-quarter earnings season saw profits jump 58.8 percent after surges of 96.4 percent and 152.6 percent in the first two quarters.

“We expect earnings to be the key driver for global equities, and this is also true for the euro zone,” said Credit Suisse chief global strategist Philipp Lisibach.

However, the resurgent pandemic in Europe and announcements of new social restrictions in Austria and elsewhere have knocked morale.

Euro zone economic sentiment eased in November amid consumer concerns about a fourth wave of the coronavirus, while German business morale deteriorated for the fifth consecutive month in November as supply bottlenecks hit manufacturing.

“Headwinds in Europe are suddenly increasing with rising energy prices, rising infections and delays in deliveries. This creates short-term uncertainty, but the situation should abate going into next year,” said Tomas Hildebrandt, senior portfolio manager at Evli Bank in Helsinki.

Most analysts still have a positive outlook going forward, but some predict a grim year ahead for stocks.

Stephane Ekolo, a strategist at the brokerage Tradition, sees the STOXX 600 losing about 30 points to 430 points at the end of 2022, as economic growth slows.

“I believe corporate earnings are likely to deteriorate over the coming six months … on the back of continued supply-chain disruptions, reopening boost fading, potential risk of restrictions and rising real rates,” Ekolo said.

Among risks cited by the poll respondents was a spike in inflation that would force the European Central Bank to speed up the reduction in monetary stimulus.

Consumer prices in Germany rose 6 percent year on year after a rise of 4.6 percent in October, increasing pressure on the ECB to react.