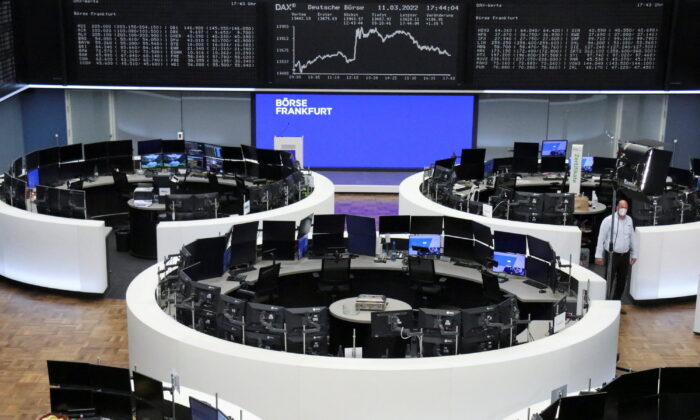 The German share price index DAX graph is pictured at the stock exchange in Frankfurt, Germany, on March 11, 2022. (Staff/Reuters)
Stocks

European stocks rose on Monday as investors pinned their hopes on diplomatic efforts by Ukraine and Russia to end weeks-long conflict, while shares in Volkswagen surged after the German carmaker doubled its operating profit.

Russia and Ukraine gave their most upbeat assessments following weekend negotiations, even as Russia attacked a base near the Polish border and fighting raged elsewhere.

“No sign yet of hostilities in Ukraine easing, but risk assets are beginning to behave as if most of the negativity is now priced in,” said Ian Williams, economics & strategy research analyst at Peel Hunt.

Shares of luxury brands such as LVMH and Richemont, which depend on China for a large part of their sales, also declined.

Investors waited for policy decisions from the U.S. Federal Reserve and the Bank of England later this week, with both the central banks expected to raise interest rates.

Hopes of progress in peace talks sent oil prices lower. Oil has surged this month after Western sanctions against Russia over its invasion of Ukraine raised concerns about supply disruptions.