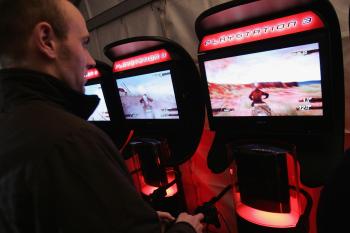 The EU has a adopted a list of rules for labeling video games. (Sean Gallup/Getty Images)
Europe

By Ekaterina Popova
Print
The European Union has adopted a list of rules for labeling video games to restrict minors’ access to such games deemed to contain harmful content.

According to a study conducted for the European Parliament (EP), not all games are suitable for all age groups, a point discussed by MPs at a parliamentary session in Strasbourg last week. By enacting a labeling requirement for videogames, MPs believe that parents can best choose games that are appropriate for their children, reported the EP’s Press Service.

Toine Manders, a member of the EP group Alliance for Liberals and Democrats of Europe, presented the study on consumer protection, in respect to the use of video games by minors. The measure was later adopted by the MPs in a Parliament meeting in Strasbourg.

The report highlights the fact that video game development, and in particular online video games, are required to inform the public on the game’s content, offer parental control tools, and provide information about the Pan-European information system (PEGI) for the age rating.

Members considered that the need to explore different approaches to strengthen controls on video game is necessary, and urged EU Member States to ensure that no national rating system will be designed that will lead to a fragmentation of the market.

According to the study, close cooperation between EU countries is one of the conditions for improving the protection of minors. In particular, indicating the exchange of information between Member States in terms of video games is now prohibited in one of them.

MPs urge the EU Commission to continue to expand the common self-regulating system of criteria for classification in the EU—particularly the PEGI labeling system—and to ensure coordination between Member States to introduce a system of labeling in the sale of games based on PEGI.

The study also discusses the possibility to develop a “red button” to be included in consoles, gaming devices and computers to disable or to control access to a game—or certain parts of it—during certain hours.

But the session wasn’t merely about restriction and criticism; deputies agreed that videogames can offer a medical benefit as well. The so-called “video therapy” has proven to be effective for the rehabilitation of patients suffering a stroke, traumatic brain injuries, muscle problems, and children suffering from Autism.

However, the report also points out that video games do in fact have a strong influence on mental health, particularly in children. And as the popularity of these games increase, so does their social significance.

At present, many Member States do not have a law that reflects the specifics of online games—a point that became apparent during the debates of the study.