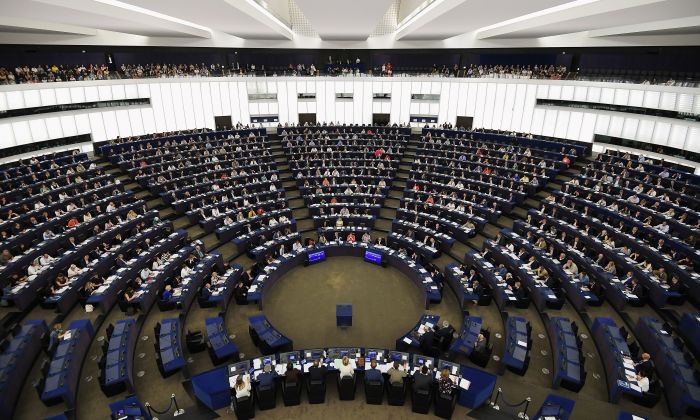 The European Parliament has passed a resolution calling on the Hong Kong government to withdraw a controversial extradition bill, uphold basic human rights, and introduce reforms to allow universal suffrage in electing the city’s officials.

In recent weeks, millions of Hongkongers have taken to the streets to protest the legislation, which would allow any country, including mainland China, to seek extradition of individuals wanted by the Chinese regime.

Owing to public pressure, the city’s leader has since announced that the bill would be suspended, but stopped short of granting protesters’ demand of a full withdrawal.

On July 18, the Parliament, which acts as the European Union’s legislative branch, approved the measure, which also condemns the Chinese regime for “constant and increasing interference” in the city’s internal affairs and violating its promise to preserve Hong Kong’s autonomy after sovereignty was handed back from Britain in 1997.

The resolution directly criticized China’s opaque legal system as the cause for widespread concern over the extradition bill, saying that it “is characterized by arbitrary detention, torture, and other ill-treatment, serious violations of the right to a fair trial, enforced disappearances, and various systems of incommunicado detention without trial.”

Furthermore, because “the proposed bill could facilitate the rendition to China of people for political reasons and their exposure to a judicial system with serious human rights failings,” the Parliament urged the Hong Kong government to withdraw the measure.

The resolution also calls for member nations and other governments to restrict exports to Hong Kong of any “technologies used to violate basic rights,” likely a reference to crowd-dispersal products such as rubber bullets and tear gas, which were deployed against protesters by Hong Kong police.

The Parliament also echoed Hong Kong protesters’ demands for the city government to release all arrested protesters and drop any charges; and establish an independent investigation into the use of force by Hong Kong’s police.

On July 16, 85 of the 751 European Parliament members, or more than 10 percent, raised a motion to debate the resolution on the current situation in Hong Kong.

The document highlighted Hongkongers’ recent concerns that their “freedom of speech, of the press and publication, and of association, assembly, procession, and demonstration” were being threatened.

For example, in 2015, a group of Hong Kong bookstore owners who published works critical of the Chinese leadership suddenly disappeared. Months later, they were reported to have been abducted and detained in mainland China.

As tensions simmer between the city government and protesters—who are planning more demonstrations in the coming weeks—many locals have said that a lack of true representation is the key reason why the government has failed to listen to their demands.

The Parliament acknowledged Hongkongers’ calls for universal suffrage in electing the city’s leader, the chief executive, and members of the legislature, urging the city government to implement “systematic reform” to establish “an electoral system that is overall democratic, fair, open, and transparent.”

Currently, the chief executive is voted in by an electoral committee that’s comprised of mostly pro-Beijing elites, while only a portion of lawmakers in the legislature are directly elected by constituents in a geographical area.

The EU resolution didn’t sit well with Beijing. Hours before the Parliament was due to vote on July 18, China’s foreign ministry issued a statement that warned the EU not to “lift a rock and drop it on one’s feet.”

Lu Kang, spokesman for China’s Ministry of Foreign Affairs, said at a press conference that the European Parliament “has no right to interfere with Hong Kong affairs and China’s internal affairs.”

The Chinese foreign ministry’s commissioner’s office in Hong Kong also issued a statement, which said: “The motion ignores the facts and confuses right from wrong … It is pointing fingers and making orders at the SAR [special administrative region] government and the central government’s Hong Kong policies.”