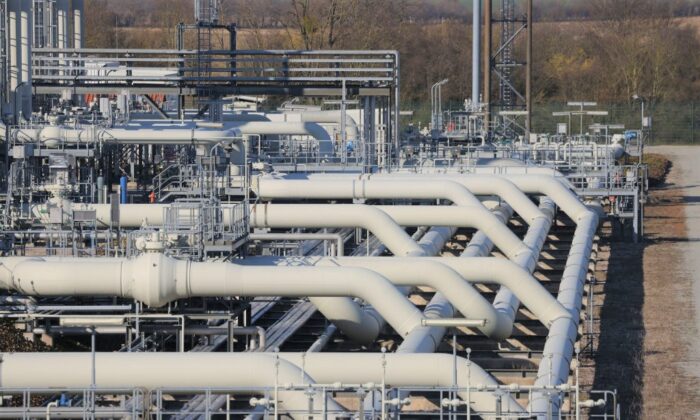 The uptick comes on the heels of a 40-plus percent rally in prices last week as Russia reduced natural gas supplies to top buyers in Europe, blaming a technical problem related to Western sanctions.

Leaders in Germany and Italy called Russia’s reductions a political move, and that move exacerbated the energy tensions in Europe, following its previous cutoff of natural gas to Poland, Bulgaria, Finland, the Netherlands, and Denmark.

“Both we and Germany and others maintain it’s a lie, there’s a political use of gas” by Russia, Italian Prime Minister Mario Draghi said while on a visit to Kyiv, Ukraine, on June 16.

Kremlin spokesman Dmitry Peskov said last week that the reduced flows are related to problems with the turbines essential for the functioning of the key Nord Stream 1 pipeline; he insisted there have been no deliberate actions on Moscow’s part to cut supplies.

Europe is seeking to reduce gas imports from Russia by two-thirds by the end of the year and has pivoted to more imports of liquid gas from the United States to make up the shortfall. But an explosion and fire at a key export facility in Freeport, Texas, knocked out about one-fifth of U.S. gas export capacity, putting pressure on Europe’s fragile gas supplies.

“European hub prices surged last week after Gazprom cut supplies through the key Nord Stream 1 flow route by 60 percent,” consulting firm Timera Energy said in a note. “This renewed market stress comes as a warning of how difficult an orderly near-term transition from Russian gas will be.”

Europe’s effort to replace Russian flows with liquified natural gas (LNG) imports faces a bottleneck in the form of a four- to five-year lead time to bring online new capacity, Timera Energy noted, meaning that new investment won’t have an impact until at least 2026.

“In the meantime, Europe will need to battle with Asia and Latin America for any incremental LNG supply to facilitate reduction of Russian pipeline imports. That means higher prices as we saw last week,” the consultancy stated.

Soaring energy prices have driven inflation higher in Europe. The latest data show that, in the 19 countries that share the euro currency, inflation shot up in May to a record high of an annualized 8.1 percent. The single biggest contributor to eurozone inflation came from energy, at 3.87 percentage points.

Fears of a winter natural gas shortage in Europe, which receives roughly 40 percent of its gas from Russia, have prompted warnings from officials that EU countries may be at risk of energy rationing.