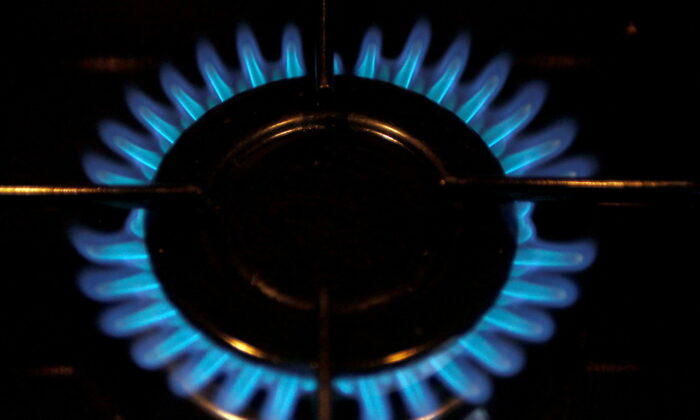 A gas burner is pictured on a cooker in a private home in Bordeaux, in soutwestern France, on Dec. 13, 2012. (Regis Duvignau/Reuters)
Commodities

Britain on Monday ordered Russian-associated vessels be blocked from its ports while officials from some European Union countries have said the 27-country bloc is considering a ban on Russian ships.

The European Parliament on Tuesday called for the EU to close its ports to Russian ships or ships going to or from Russia.

Although the Parliament does not set sanctions and its vote on Tuesday was non-binding, traders said it showed the direction of travel for possible tightening of measures against Russia which supplies around 40 percent of the bloc’s natural gas.

Not all countries get supply directly from Russia, but if countries such as Germany, the biggest consumer of Russian gas, receive less from Russia, they must replace this from elsewhere, for instance, Norway, which has a knock-on effect on available gas for other countries.

The British front-month contract hit 384 pence a therm, its second highest ever level amid reports Russian cargos of liquefied natural gas (LNG) were being diverted away from UK ports.

“The price move today is not based on fundamental changes to the European gas balances,” said Leon Izbicki, European Natural Gas Analyst at Energy Aspects.

“The main driver behind the sharp rise in the TTF is a perceived increase in the risk of European sanctions targeting Russian energy exports,” he said.

Despite the ongoing war in Ukraine, physical deliveries of gas from Russia to Europe through its various pipelines have so far remained largely unchanged.

Even gas coming from Russia via pipelines through Ukraine have remained robust. Capacity nominations for supply to Slovakia from Ukraine via the Velke Kapusany border point were expected to hit their highest level so far in 2022, at 881,917 megawatt hours (MWh) on Wednesday.

But traders and analysts said as the war and sanctions escalate so do the possibilities that this could change, which is causing the huge price gains.